So the Phillies didn't really give a damn about this game, and played like it for the better part of seven innings.  The Phillies only managed two runs on a single hit -- a two-run bomb by John Mayberry, Jr. in the second innings -- off Braves starter Tim Hudson, appearing in what amounted to a life-or-death game for the Braves.  Hudson only gave up that hit plus another two run homer to Jayson Werth.

Some unresolved scariness in the second inning, though, as Hudson plunked Carlos Ruiz on the left elbow.  Chooch remained in the game for the rest of the inning, but was replaced by Brian Schneider in the bottom of the second.  That could be bad.

The Phillies played pitcher roulette in the afternoon with mixed results.  Cole Hamels looked sharp in his two hitless innings, while Roy Oswalt gave up a run on two hits in his third inning appearance.  Joe Blanton looked Blantonian, allowing two runs on four hits in one inning.  But it was Danys Baez who really took the cake: Five hits and four runs in just two thirds of an inning.  The long term good outcome here might be that the decisionmakers realize just how worthless Baez truly is and cut bait.

Then things got fun in the top of the eighth, with the Phillies plating three runs of Jonny Venters and Billy Wagner, making the score 8-7 and putting a nice scare into Bobby Cox at his old man's debutante ball.  Wagner came back out for the Braves in the top of the ninth, striking out the side and guaranteeing Atlanta at worst a play-in game on Tuesday if the Padres manage to win today. 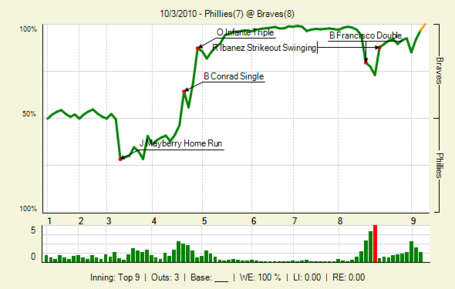