Phillies right-hander Roy Halladay pitched the first postseason no-hitter since Don Larsen's 1956 World Series Perfect Game this evening in Philadelphia, holding the Reds to just a single baserunner in the form of a fifth inning full countwalk to Jay Bruce en route to a 4-0 Phillies victory.  It was Roy Halladay's first postseason appearance, and it was an absolute masterpiece.

Halladay's stuff was as good as it's ever been. The fastball darted in and out.  His command was impeccable.  He only needed 104 pitches.   I'm just floored right now.  He has a Perfect Game and a postseason no-hitter under his belt.  We are lucky fans!

On the offensive side of the ball, Shane Victorino led the Phillies with two hits, including a two-RBI single in the second that extended the Phillies' lead to 4-0 off Reds' starter Edinson Volquez, who struggled in his brief outing.

Travis Wood and the rest of the Reds bullpen largely kept the Phillies in check, but really, who cares?

We are all baseball fans, and we love the game, and we all hope we can see something as awesome as what we saw tonight.  Congratulations Phillies, and congratulations Roy Halladay. 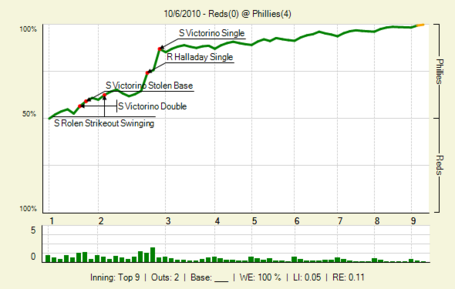