The Autopsy: A Closer Look at the Second Postseason No-Hitter in Major League History

Share All sharing options for: The Autopsy: A Closer Look at the Second Postseason No-Hitter in Major League History

Not content with merely pitching well enough for his team to win in his postseason debut, Roy Halladay went out and threw just the second postseason no-hitter in baseball history. He joined Don Larsen who threw a perfect game in game five of the 1956 World Series. Halladay also became the first pitcher to throw two no-hitters in one season since Nolan Ryan in 1973. It is the second straight outing in which he pitched nine innings and faced one batter over the minimum. Yes, in 18 innings over his last two games, Roy Halladay has faced 56 batters.

There is simply no overstating just how untouchable Doc was last night. With both vicious movement and pinpoint control of each of the 50 different kinds of fastball he throws as well as total command of his filthy secondary pitches, Halladay was making the Reds quite potent lineup look absolutely silly all night. For those who were watching, it certainly seemed like he could have thrown another three innings of hitless ball if he needed to. The line tells the basic story (9 IP, 0 H, 0 R, 1 BB, 8 K, 0 E, W), but a full appreciation of just how dominant Roy's performance was requires a deeper look into the numbers. Read on.

As many have already pointed out, one key to Halladay's success last night was throwing strike one, which he was able to do on the first pitch to 25 of the 28 (89%) batters he faced. To keep the Reds hitters from sitting on his fastball, Roy also mixed in first-pitch changeups and curveballs that, when they weren't being flailed at, were spotted perfectly for called strikes. With the vast majority of hitters buried in pitcher's counts (there were 11 0-2 counts), Halladay could then get them to chase pitches out of the zone for strikeouts -- five of his eight strikeouts were of the swinging variety -- or for weak balls in play. On the many occasions that the Reds were swinging early in counts, the location and movement of his fastballs, in particular, resulted in weak groundballs and popouts. In total, Roy induced 12 groundouts vs. 6 flyballs in play (one foul popout). Only four balls reached the outfield and only one of them, off of the bat of pitcher Travis Wood, was particularly well hit -- a sinking line drive to right that Jayson Werth caught about knee high. Raul Ibanez had a very boring night in left as the Reds managed nary a flyball to that side of the outfield. Despite a walk, he needed only 104 pitches to complete the no-hitter. 79 of those pitches were strikes and 19 of those strikes were swinging strikes.

In many ways, the underlying numbers compare favorably to Halladay's perfect game. In that outing, he needed 115 pitches (72 of them strikes) to finish off the Marlins and despite 11 strikeouts on the night, he generated only eight swinging strikes total. Meanwhile, compare his GB:FB of 8:8 in that game to his 12:6 in last night's masterpiece.

How does Roy's no-hitter compare to Larsen's perfect game? Pretty well, actually. Larsen needed just 97 pitches, 71 of them strikes, to finish off the Brooklyn Dodgers. In addition, he generated 12 swinging strikes and recorded seven strikeouts. Larsen, who appears to have been a fairly extreme flyball pitcher, posted a 6:14 GB:FB and allowed four line drives. So, outside of Halladay's walk, these disparities in swinging strikes and linedrives suggest that Halladay was a good bit more dominant last night than Larsen was in his perfect game. Larsen edges Halladay in WPA, however, with a .59 to Roy's .306 as the Phillies staked Roy to an early 4-0 lead while the Yankees supplied Larsen with only two runs -- one each in the fourth and sixth innings. Of course, one cannot forget that Larsen's perfect game came in the World Series, but I would argue that Roy's no-hitter in his first career playoff appearance is quite impressive in its own right. Appropriately, however, Halladay and Larsen each posted game scores of 94 in their respective gems.

Finally, for anyone who might see fit to complain about the strikezone last night (cough, Cabrera, cough), read it and weep: 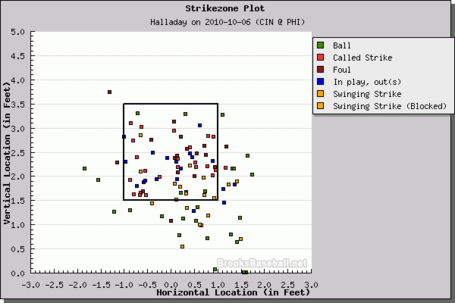