If the Phillies' Game One win over the Reds in the National League Division Series, a no-hitter pitched by ace of aces Roy Halladay, was an epic love story that we'll all remember forever, their Game Two triumph was a 4am beer-goggle hookup that, at least in terms of aesthetics, most would choose to forget.

Starter Roy Oswalt went just five innings, Chase Utley made two errors, Placido Polanco and Jimmy Rollins both took 0-for-5s, the team needed six pitchers for the regulation nine innings and no Phillie had an extra-base hit. But they took a 2-0 lead nonetheless, thanks largely to four Cincinnati errors, six walks and three hit batsmen. Of the Phils' seven runs on the night, just two were earned. This is unlikely to be of much consolation to Dusty Baker's team as they head back home facing the daunting prospect of needing to beat Cole Hamels, Halladay and Oswalt in succession to continue in the 2010 playoffs.

Despite his 23-3 lifetime record against the Reds, Oswalt might not seem such an obstacle after tonight. He terminated the Phils' 30 inning scoreless streak against Cincinnati before recording an out, surrendering a homer to Brandon Phillips to lead off the game. Utley's two throwing errors in the second inning let the Reds double the lead, a Jay Bruce solo shot made it 3-0 in the third, and a deep sacrifice fly by Joey Votto to score Phillips again in the fifth stretched the lead to 4-0. Oswalt left after five, allowing those four runs (three earned) on five hits and a walk against five strikeouts.

Bronson Arroyo kept the Phils off-balance and off the board with his Moyeresque array of soft stuff through four, and would have made it five were it not for consecutive two-out errors with men on by Phillips and Scott Rolen. With the bases loaded, Utley got a measure of redemption by singling in two runs, but Arroyo struck out Ryan Howard to escape further trouble. The Phils drew closer in the sixth, as Arroyo walked Jayson Werth to lead off the inning, retired Jimmy Rollins, then gave way to Arthur Rhodes. Rhodes struck out Raul Ibanez, but hit Carlos Ruiz with a pitch. Dusty Baker removed Rhodes for Logan Ondrusek--who hit pinch-hitter Ben Francisco to load the bases. With the crowd roaring, Ondrusek walked Shane Victorino on five pitches to score Werth and make the score 4-3. But Placido Polanco grounded out to end the inning.

After Jose Contreras held the Reds off the board in the top of the seventh, the Phils faced Aroldis Chapman and his 100-plus mile fastball. My main hope as the bottom of the seventh began was that Chase Utley, sometimes known as The Human Magnet for his HBP tendencies, wouldn't take a Chapman heater off any particularly vulnerable or baseball-useful part of his physical form. Yet Utley did earn first base the hard way--or rather the hard-ish way, as a Chapman pitch might have passed close enough by his hands to disrupt the vaseline-gelled hairs on Chase's fingers. Howard struck out, but Werth's soft grounder to Rolen at third enabled Utley to beat the throw to second, bringing up Rollins with two on and one out. He hit a soft fly toward Bruce in right--which, between the lights and the crowd noise and a few thousand waving white towels in his field of vision, Bruce misjudged as it dipped under his glove, allowing Utley and Werth to score and giving the Phils a 5-4 lead. After Ibanez singled to right, Ruiz chopped a slow grounder to short that forced Ibanez at second but let Rollins score to stretch the lead to 6-4.

Ryan Madson worked around a Joey Votto single and a wild pitch to keep the Reds off the board in the top of the eighth, and the Phillies stretched their lead to 7-4 on a one-out Utley single (further suggesting Chapman's fastball didn't, um, touch his hands) and steal of second, and  a Werth single through the left side. That brought Brad Lidge on to finish things off in the ninth. Lidge momentarily sped up heart rates by walking Bruce to lead off the inning, but got Drew Stubbs and pinch-hitter Miguel Cairo to fly out to center. Chris Heisey came up as the Reds' last hope, and blasted a rocket toward third--where Polanco picked it off on a hop and fired a strike across the diamond to finish off the game.

This is a story without a hero: Contreras got the win for his scoreless inning of relief, Lidge earned a save despite giving up a walk and a smash, and no Phillie so much as doubled (though Werth and Ibanez each reached base three times, on two singles and a walk). Yet this win is probably as or more representative of playoff baseball as the Halladay masterpiece: one team, given a sizable early lead with a highly touted defense and bullpen to protect it, absolutely self-destricted. and the other threw them a cinderblock rather than a life preserver.

The series shifts to Ohio Sunday, as the Phils try to finish off the Reds behind Cole Hamels. Johnny Cueto goes for Cincinnati. 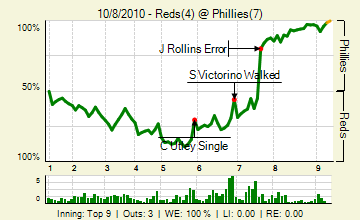