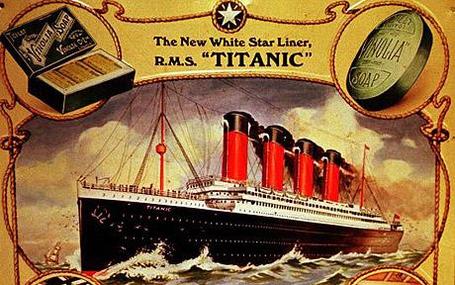 A source close to the Phillies organization revealed to TGP early this morning that the 2011 Phillies media campaign will employ a nautical theme that will reach back to the age of luxury steam ocean liners.

The team expects to unveil the campaign in January as part of its preseason push to fill seats, which was boosted considerably last week when the team signed ace pitcher Cliff Lee. After the signing, Phillies fans experienced lengthy delays on the Phillies' website as fans rushed to buy season ticket plans.

"We wanted to communicate to our fans the confidence in the product they're about to experience, and one that communicated the ideas of speed, dependability, dominance and luxury. Our agency did a historical search of those kinds of campaigns, found a great one, and then adapted it for baseball before presenting it to us. Dave (Phillies President Dave Montgomery) and Bill (part-owner Bill Giles) were thrilled with the concept and approved it immediately," the source said.

"The beauty part was, the one we found was great because it let us wink at our fans' 'inner kid' who yearns for the triumphant goal achievement in New York, too. That's something we can't guarantee, of course, but just the idea was kind of like an added bonus."

As for individual players taking part in the campaign, the Phillies will naturally feature right fielder "Unsinkable" Dom Brown in a circa 1912 Phillies uniform as a giveaway for fans under 14 during the April series with the Braves. The source also indicated that the campaign allows the Phillies to play with other similar "un-" words, like "unthinkable" and "unforgettable." Phillies fans can expect extension campaigns later in the season such as, "Making the Unsinkable Happen," and "Embrace Me, You Sweet Unsinkable You," that will feature pitchers Cole Hamels, newly acquired Cliff Lee, and fan favorites Ryan Howard and Chase Utley. Other extensions will play on the nautical angle, such as, "Sea You in the Stands" and a special fan giveaway poster with Jimmy Rollins featuring the slogan, "U Can't Sink This." The source indicated that Phillies marketing executives have made enquiries into singer M.C. Hammer's availability for a possible postgame concert at a date yet to be determined.

The Phillies are also investigating the possibility of roving dance bands to perform during dollar dog nights, and also may salute Cy Young Award winner Roy Halladay with a performance of the song, "Nearer My Roy to Thee," possibly on Jewish Heritage Night in August.

The Phillies have also consulted Majestic, their uniform supplier, for special sailor suit uniforms for the June 28-30 interleague series against the Boston Red Sox, and have contacted the opposing club to see if they will also follow suit.

Asked why the team chose not to feature its historic rotation, the source indicated that recently received data found that fans were beginning to shift away from the media-fueled hype about the pitching staff. "Focus groups told us that all of the puns that used the word "Phour" were played out by the end of last week, and just kept climbing on the unfavorable scales."

"We wanted something that was more about everyone climbing on board for the same marvelous ride," the source said, "one that will go down in history."