Share All sharing options for: My 2010 MLB Most Beloved Team

In honor of St. Valentine's Day, I give you my follow-up to my previous accumulation of Despicable Players, one that rankled the Helen Lovejoys over at the Yankees blog.  Here are my favorite non-Phillies.  And with one choice in particular, I hope the dowagers in the Bronx get light-headed from the apparent incongruity of it all.  Let's begin. 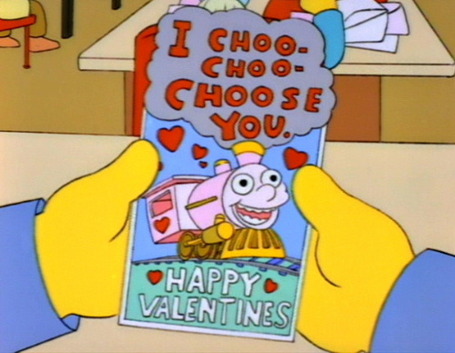 My fluid guidelines will exclude guys who spent any significant time with the Phillies.

Catcher: Brian McCann - Yes, he plays for a hated rival, and he does pretty well against the Phillies (.897 career OPS).  But he's a tough bastard, despite being a big whiner about Citizens Bank Park.  But who on the Braves isn't?  Maybe this is more of a "respect" than "love" thing, but it takes all kinds.

First Base: Albert Pujols - It's hard not to appreciate his greatness, and the fact that by most accounts he's a really humble, giving dude.  Those 2006 MVP selection comments are a little out of character, but he did kind of have a point.  We'll be telling our grandkids that we saw him play.

Second Base: Ian Kinsler - It's too bad he can't stay healthy.  I always find myself rooting for the Jewish players, too (except Kevin Youkilis, whose beard and awful batting stance I hate).

Shortstop: Troy Tulowitzki -This is a much easier choice after the events of October 2009; it would have been hard for me to select him if the lingering bitterness of the 2007 NLDS were still there.

Third Base: Mark Reynolds - For understanding that strikeouts just aren't a big deal, and practicing what he preaches.  I'll take a team full of Mark Reynoldses over a lineup full of David Ecksteinian, move-the-runner, productive-outsmiths seven days a week.

Left Field: Adam Dunn - In theory, his last year of "eligibility" at this position.  Chosen largely for the reasons cited for Reynolds above, even if he's not as (outwardly) intuitively aware of the inherent value of what he does.

Center Field: Andrew McCutchen - I'm always fascinated when great new players enter the league.  They really are the future, without getting all Whitney on you.  It helps that he plays for my second favorite team.  Hopefully he can stick in the 'Burgh and the new regime can put together a respectable team.

Right Field: Justin Upton - Only 22 years old, and I bet my thoughts about him would be a lot more negative if he played in the NL East.  A good candidate for "best player in baseball" honors in a couple years.

Starting Pitcher 1: Ross Ohlendorf - A Princeton graduate, and an off-season intern at the Department of Agriculture.  And not half bad as a pitcher, either.

Starting Pitcher 2: Brian Bannister - Okay, so he's a little short on raw stuff, but he really "gets" pitching from a sabermetric viewpoint, and seems to have passed a few pointers along to AL Cy Young Award winner Zack Greinke.  If his pitching career falls through, someone needs to scoop this guy up to be a pitching coach.

Starting Pitcher 3: Tim Wakefield - The Last of the Mohicans.

Relief Pitcher 1: Pat Neshek - How can you not love this guy?  Funny, self-effacing, bright, and accessible.  And that sidearm delivery is the dopest.

Relief Pitcher 2: Mariano Rivera - Classy and understated despite being a cold-blooded assassin.  He really embodies all of the qualities that the press foists upon certain shortstops.  Devoutly religious without being sanctimonious, he really walks the talk.  The professional's professional and the greatest relief pitcher ever.  I couldn't even hate him this past November.  It's like hating a bee for stinging you.  It's what he does.

Manager: Jim Leyland - You have to love his candor.  Or maybe not.  But I thought this was funny.

He was being interviewed by then-ESPNer Chris Myers, who was asking him about his well-publicized tendency to smoke cigarettes in the dugout. Leyland paused for a moment, put his head down and delivered the obligatory platitudes about how bad smoking is for you, how children should avoid smoking, how he knows it's unhealthy. Then he looked directly into the camera, his eyes very wide, and said, "Still. Smokers out there, you know what I'm talking about. That moment, after you've had a huge meal, say at Thanksgiving, when you step outside in the cold, light up a cigarette and take a deep inhale ... that's about the best moment in the world, you know? All the smokers out there, you know that feeling. Sometimes, smoking is fantastic." Myers quickly cut to commercial, and Leyland has never been on the show since.