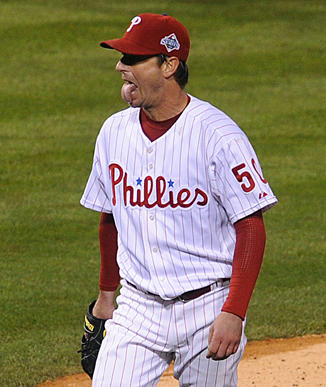 
I don't know about any of you, but I'm starting to get a bit alarmed (and annoyed) by the level of antipathy brewing out there among the olde fan base toward Jamie Moyer. For the last two weeks, anytime I've seen any comment thread for practically any article about any pitcher on the team, on philly.com or the usual-suspect blogs, there have been at least a handful of posters who have felt compelled to go out of their way to make everything about Moyer, Moyer, Moyer.

For example, today in an article about Andrew Carpenter, we have:

If Moyer can win 12 games with this club Carpenter could too.

Great article. I agree with Eagle_1960 about how good it is to read about the fringe players trying to make themselves stick in the big leagues. Please trade Jamie Moyer!

I realize that it's a mistake to overinterpret a handful of idiot comments on philly.com, that this isn't a statistically significant sample, that online commenters are not necessarily representative of the fans as a whole, and so forth, but trust me, this is not an isolated occurrence. It's happening on practically every pitching-related article. In a matter of months, Moyer seems to have plummeted straight from "overappreciated veteran intangibles guy with local ties" all the way down to "inexplicably disliked enemy of the people" - maybe not on the level of a Bobby Abreu, but perhaps somewhere in the vicinity of a Pat Burrell or a Mike Lieberthal. I am seriously wondering if Moyer will be booed in his first appearance at CBP this year. I think it's unlikely, but possible.

There seem to be two things going on here, psychologically. First, a lot of people are still holding a deep grudge over the fact that Moyer expressed discontent over his demotion to the bullpen after the Pedro signing last year. Second, a lot of people "blame" Moyer for the fact that we traded Cliff Lee for, in their words, three worthless fringe prospects. But honestly: Who cares if Moyer complained about the demotion? He still accepted it, didn't he? He was asked a question about how he felt, and he answered it honestly. What's the big deal? As for the Cliff Lee thing, while I didn't always feel this way, I am presently inclined to believe that Ruben would have pulled the trigger on that trade even if he'd had another $6.5 million under the budget to play with. That trade was primarily about the minor league system. If it had only been about the money, Ruben could have saved the same amount in other ways. And while I think we should have gotten a better return for Lee, the three guys we got are a lot better than fringe prospects.

To be sure, I am not saying it was a good idea to sign Moyer to a two-year deal after the 2008 season. What Ruben ought to have done is offer Moyer arbitration. That said, giving Moyer that contract wasn't exactly the most horrible move in the world either. As PF noted in a recent thread, Moyer's xFIP wasn't that bad last year. In fact, his xFIPs have been very consistent since he came over here from Seattle in 2006. Plus, even if you go by his ERA: yes, he had a bad one last year. But there were long stretches in the first half when we really didn't have any better options. If not for Moyer, we would have had to use either Carpenter or Unreconstructed Kyle Kendrick every five days, and who knows what that would have done to our season? Moyer may not have been better than replacement level, but paradoxically enough, it still might have really hurt us if we hadn't had him around.

As for what we should do about Moyer this year? I'm not opposed to giving him a little bit of the benefit of the doubt in his battle vs. Kendrick. If the race is close, I will not object if Moyer gets the job. And based on his recent xFIP's, I wouldn't expect him to do poorly, unless his offseason surgeries have taken a lot out of him (which is, admittedly, possible). I'd expect him to be what he's always been: a 4.70-or-so pitcher.

Of course, if he fails, he fails, and if he proves he's lost it, then it is what it is. I have no sentimental attachment to the guy. If Kendrick is clearly better, Kendrick should start. What troubles me is the number of alleged Phillies fans out there who clearly want Moyer to fail, based on what appears to be sheer personal animus and without any regard for how that might hurt the team. It's like they'll be upset if Moyer beats the odds and pitches well! I remember a similar kind of thing happening with Pat Burrell a few years before he left. When he played poorly, we had to get rid of him because he sucked. When he played well, then we still had to get rid of him because his trade value would never be higher. There was never any consideration given to the possibility that: hey, maybe he's actually better than we think he is.