How Do You Solve a Problem Like the Jayson Werth-Ryan Howard Contract Situation?

Share All sharing options for: How Do You Solve a Problem Like the Jayson Werth-Ryan Howard Contract Situation? 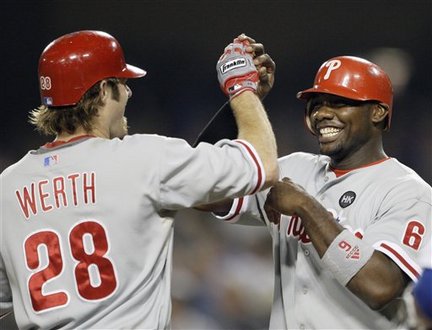 As I mentioned in another thread a while back, I had been working on an analysis of what we should do with Jayson Werth and Ryan Howard this offseason, but it got to be way too complicated. There are just way too many variables and moving parts to simply say Choose Door A or Choose Door B.

So instead, I'm just going to lay out in a list what I think are all of the relevant facts, followed by a few implications I draw from those facts, in haphazard, bullet-point style.

First, the facts.  (This is not a quote. I just can't figure out how to indent without making the gray box.)

3. As of 2012, Werth and Howard will both have long-term deals somewhere.

4. Werth will probably get at least $16 million per year on his long-term deal.

5. As of 2012, we will not have both Werth and Howard under contract. (I'm not going to say the Phillies won't be able to afford both. But I do think they will consider it unwise to do so. And I suspect that they will be right. So it will be one or the other or neither.)

7. It is a somewhat better bet that Werth will age well than that Howard will age well, although this is pretty speculative.

8. Werth posted slightly more WARP in 2009, but his track record is shorter than Howard's.

9. Werth fields his position better than Howard fields his.

11. The deepest part of the Phillies' farm system is the outfield.

12. Domonic Brown is a corner outfielder who is expected to be ready in 2011.

14. The only legitimate 1B prospect in the Phillies' farm system is 19 years old and played in the Gulf Coast League in 2009.

15. A lot of 1B are expected to be available as free agents this offseason (Dunn, Glaus, LaRoche, Derrek Lee, Carlos Pena, probably Nick Johnson, possibly Lance Berkman). None are as good as Howard, but they are all good players.

16. No matter what happens, we will not trade Howard during the 2010 season, nor will we trade him during the 2011 season. It will be during the upcoming offseason or not at all.

17. If Raul Ibañez plays well in 2010, he will be tradeable in the offseason. But we won't get much in return for him.

A. There is a reasonably strong (though not, I would say, conclusive) argument that Werth is already a better player than Howard. Plus, he will probably age better than Howard.

B. Howard's trade value this offseason will probably be lower than a lot of people think. He will have only one year left on his contract, he will be owed $20 million, and there will be numerous legitimate 1B alternatives available on the 2010-11 FA market. Cliff Lee is a more valuable player than Howard who was only owed $9 million in the last year of his contract and who plays a more in-demand position, and yet, while I don't think the package of prospects we got back from Seattle was bad, nobody was blown away by it either.

C. If we let Werth walk, our consolation prize will be: two draft picks and $16 million of additional space under our budget. The good news is that, because of Domonic Brown, we will not have to use any of that $16 million on Werth's replacement. We can use it for other needs. (Pitching? Re-signing Rollins? Re-signing Howard? Extending Utley?) Brown will essentially be free in 2011.

D. If we trade Howard, we probably won't get as much back as people might be hoping (see Point B above). On the other hand, we will get $20 million of additional space under our budget. On the other other hand, we will probably have to use a good chunk of that $20 million on our replacement for Howard. We will also lose the possibility of getting any draft picks after the expiration of Howard's contract, should he choose to sign elsewhere.

And now, some final thoughts.

As you can probably tell from the overall tone of my post, I am leaning in the direction of concluding that we should just let Werth walk. There are too many uncertainties, though, to be definitive about it.

Letting Werth go would not necessarily mean giving Howard the extension he wants. Howard might be able to command a higher price on the open market than he is really worth (no pun intended). But if we don't extend Howard, we will have $25 million to spend elsewhere. As long as we get $25 million worth of talent for our $25 million, I don't care much if it's spent on Howard or on other players. The main thing is to *not* spend that money on a position where we have a more efficient alternative. That would be a waste.

On a related note, it's always important to keep in mind that the name of this game is not to get the best players, per se. No, the name of the game is to get the most out of your budget as you possibly can. If Joe Mauer becomes a FA this offseason and the Orioles have the money to get him (totally hypothetical), they should decline to do so because they already have Matt Wieters at $500,000/year. This is the case even though Wieters, as good of a prospect as he is, will almost certainly be far inferior to Mauer in 2011. The point is that Wieters will be a better *value*, and so the Orioles' money would be better spent elsewhere, even if on an inferior FA. By taking one inferior player, they can actually increase the overall talent level of their team.

I have seen some people advocate a sort of "triple bankshot" solution, in which we would extend Werth, trade Howard and Ibañez, acquire a 1B in one of those trades or as a FA, and promote Brown. I can understand the appeal of that solution, but the more bankshots there are in a plan, the less you can really rely on being able to pull it off. Talent is fungible to a degree, but it isn't perfectly fungible.

Finally, I understand that Werth is righthanded, and that if we just replace him with Brown, then all of our power hitters will be lefthanded. That is not ideal, but I don't think it should influence our decision-making that much. Having a balanced lineup is a good thing, but it still remains the case that (1) the vast majority of our at-bats are not going to come against situational lefties, and (2) there's only so much that teams can do to manipulate their pitching staffs to make them more lefthanded, even in the postseason. There are only so many *good* LOOGYs around. If the other team wants to load up its bullpen with crappy LOOGYs to face us, well, I'm alright with that. Obviously, it would hurt us in close games if our lineup were to become imbalanced, but it's better to have a more talented team that does worse in close games than it is to have a less talented team that does better in close games.