The Phillies win their first Home Opener in like forever, but lose both Jimmy Rollins and Jayson Werth to injuries of unknown severity.  And Cole Hamels had another baffling, overall disappointing start.  So no one's really basking right now.

Still, a win's a win, and the Phillies have gotten off to a terrific 6-1 record (albeit against two of the four worst teams in MLB).

Fans got a confusing first inning slap upside the head after Jimmy Rollins, introduced in pre-game as the starting shortstop, did not take the field; instead, Juan Castro took his spot.  We found out later that Rollins suffered a right calf strain, and will apparently be getting an MRI tomorrow.  More good news?  Jayson Werth was pulled from the game with left hip soreness after the fifth, and was replaced by Ben Francisco.

Cole Hamels again vacillated between looking very sharp and falling prey to the same death-by-papercuts two-out Death Blooper Syndrome that felled him so often in 2009, and continued last Wednesday.  He really only gave up two truly hard hit balls all day -- one a Josh Willingham homer -- but a two out two run bloop double to pitcher Jason Marquis put the Nationals up 4-0 in the middle of the fourth inning.

The Phillies, for their part, exploded for a total of seven runs in the fourth and fifth innings, including Chase Utley's second home run of the season.

So there it is.

Hopefully we'll get good news on Rollins and Werth over the next couple of days.

Everyone ride the Fangraph WE Graph!!  WHEEEEE!!! 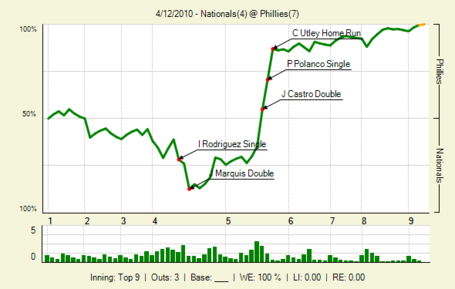