On a day when the Phillies got their worst (only bad?) news of the young season when Jimmy Rollins was placed on the disabled list, the team went out and bad it's biggest offensive outburst of the season, putting 14 runs on the hapless Nationals' pitching staff, and winning the second game of the three game set by a score of 14 to 7.

It certainly wasn't smooth for the first, oh, six innings or so.  Kyle Kendrick was, well, bad.  Again.

Kendrick failed to escape the second inning, going just 1 2/3 innings, allowing six hits and six earned runs, as the Nats and Phillies swapped multi-run frames in the first two innings.  The score was tied at seven until the fifth inning, when new leadoff hitter Shane Victorino put the Phillies up for good with a two run homer.  The Phillies proceeded to stack on another five runs, including the an upper deck solo home run from Chase Utley in the sixth inning, for his second bomb of the night.  Victorino finished just a double short of the Cycle for the night, after a bases loaded triple in the seventh inning.

Good stuff.  Honestly, I'm getting a little anxious to see how this lineup does against some better teams. 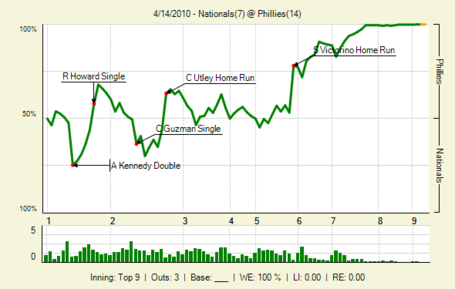