Share All sharing options for: Yeah, But Besides That...: Marlins 5, Phillies 1

Lots of scoring at the beginning, a lil' bit at the end, and a whole lot of flailing, lunging, and Mets/Cardinals-esque offensive ineptitude in between.  That was tonight's tilt in a chilly South Philadelphia, as Ricky Nolasco held the Phillies to a single run, taking a shutout to the bottom of the ninth with two outs; only a Jayson Werth solo home run saved the Phillies from that indignity.

Jamie Moyer did not look like the licensed "Marlin Killer" in the first inning, allowing five runs, including a three run bomb to erstwhile Phillie Ronnie Paulino.  But after that... he looked awfully good, striking out seven Marlins during the remainder of the game.  The Phillies bullpen turned in a good performance, allowing just two walks and no hits in three innings pitched.

The story of the night was Ricky Nolasco, who dominated the Phillies batters all night.  The unforgiving weather conditions and strong winds knocked down flyballs for both teams, but disproportionately impacted the Phillies, who hit 13 flyballs on the night, in contrast to the Marlins' six flyballs.

The teams will take the field tomorrow afternoon in the rubber match of the three game set, with Cole Hamels taking the hill for the Phillies. 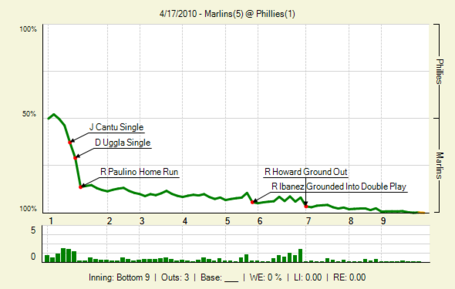