So Cole Hamels has two mediocre outings to start the season, and gathers two victories.  He's brilliant today, and takes the loss.  This is why Win-Loss records for pitchers should be all but ignored.

Hamels allowed just two runs today -- the first, on a solo home run to Dan Uggla in the second inning, scraping the left field foul pole, and one inherited runner in the ninth allowed by Ryan Madson.  He struck out eight and allowed zero walks in eight innings pitched.

But for how great he was today, the Phillies vaunted bats could get absolutely nothing done against Nate Robertson.  Yes, Nate F****** Robertson handcuffed the Phillies today, giving up four hits in  6 1/3 innings, as the Phillies lost their first home series of the season to the Marlins, dropping to 8-4.

The Phillies best scoring opportunity came in the bottom of the fourth, when Jayson Werth led off with an infield single.  Ben Francisco then smashed a ball to center field that hopped the fence, forcing Werth to hold at third base.  Juan Castro then (surprise!) struck out, and the inning all but ended in the next at-bat when Werth failed to tag and score on a line out to center field off the bat of Carlos Ruiz; after hesitating, Werth missed Cameron Maybin's overthrow of the cut-off man and failed to break for home.  Hamels then popped out to end the threat.

The Phillies 1-4 hitters were a combined 1 for 15 with one walk, which says just about everything.

Day off tomorrow, then to Atlanta.  Feel the excitement. 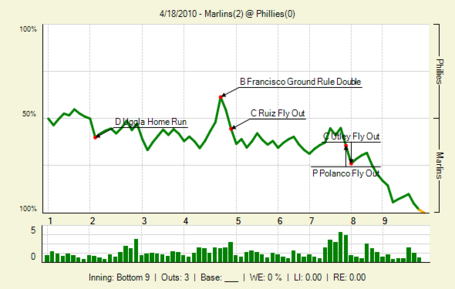