To be honest, there's really not a whole lot to say about this game that one couldn't glean from the box score: the Giants scratched out an early lead, chipped in a couple of runs later on to add to it, and the Phillies' bats went silent once again.

The Giants "jumped on" Roy Halladay early on, with a 2-out, 3-2 seeing eye single to left by Mark DeRosa plating a pair of runs in the bottom of the 1st.  San Fran would strike again in the 2nd, with an Eli Whiteside double scoring John Bowker to push the scoreline to 3-0.  Halladay pretty much settled down after that, but that deficit proved insurmountable for a Phillies offense that's looked out of sorts for about a week-and-a-half at this point.

Giants starter Jonathan Sanchez was hardly economic, barely getting through 5 innings before exiting with his pitch count at 107, but he was nonetheless effective, holding the Phils to just 1 run on a Chase Utley RBI groundout in the 5th.  Sanchez walked 5 but managed to dance between the raindrops, stranding a pair of Phils in both the 1st and the 5th, and leaving the bases loaded in the 3rd.  The only other real threat for the Phils came in the 7th, but Giants reliever Jeremy Affeldt made Ben Francisco -- starting in left for Raul Ibanez against the left-handed Sanchez -- look foolish on a 1-2 curve.  It was the second time on the night that Francisco left the bases full of Phillies.

To their credit, the Phillies' bats did manage 7 walks to reverse a troubling trend from the Arizona series -- but that was offset by an awful performance with men in scoring position, as the Phils went 0-11 and stranded 11 runners.

Game 2 of the series is tomorrow, with Jamie Moyer opposing the Giants' Todd Wellemeyer and his stellar 11-to-11 strikeout-to-walk ratio this year.  Expect a pitchers' duel. 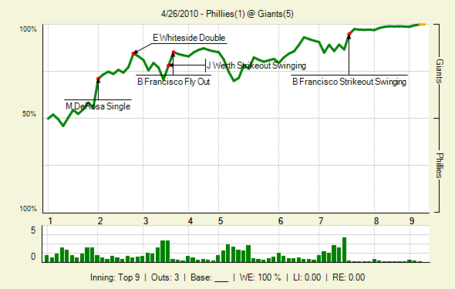