In one of the most godawful Phillies games in recent memory, the Philadelphia Phillies could only scratch out three hits and one run against consensus Cy Young Award favorite Todd Wellemeyer.  Although they added a run in the eighth, the overall offensive output of the team remains tepid and frankly, boring as hell.

Jamie Moyer gave you about what you expect him to give you -- six innings, four runs.  And Chad Durbin did his best to put the game out of reach, with a two-run seventh inning relief performance.  All more or less a moot point, thanks to the pathetic offense.

Some numbers to digest!

Shane Victorino and Placido Polanco = 0 for 8

Ryan Howard: Two hits... but thrown out at second, standing, on an easy double in the second inning.

Chase Utley: One hit... ALSO thrown out at second, trying to stretch a single.  In the ninth inning.  Down four runs.  Yeah... and a throwing error.

The 1-4 hitters are really, really miserable right now.  A lineup shake-up might be in order.

With tonight's loss, and the Mets doubleheader sweep of the Dodgers earlier in Queens, the New York Mets gain sole possession of first place.  Ruminate on that one.

BUT we will always have this: One of the most awesome double plays of all time.  Go view it, and pretend it happened in a good baseball game. 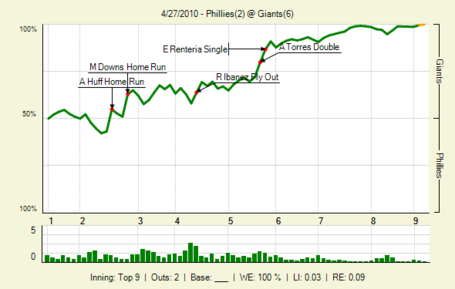