It was getaway day in San Francisco on a 50-degree, wind-blowing-out-to-center late April afternoon, as the Phillies stared down the barrels of the NL's reigning Cy Young Award winner, Tim LIncecum, a four-game losing streak, a 3-6 road trip, getting swept for the first time since last year's vomitous showing in Houston in September, and a return home to face the division-leading Mets on Friday with Kyle Kendrick on the mound. The offense had sputtered miserably in the first two games, as each game on the trip seemed to outdo the previous one for offensive, well, offensiveness.

The game played out exactly as every baseball fan in America expected. Lincecum was fantastic, allowing only three hits, one walk, and striking out 11 Phillies. Cole Hamels matched him early on, too, despite that suspect dread he pitches with these days. And there were the odd surprises, like a welcome opposite-field home run by Ryan Howard in the 5th inning that started the scoring (first in 66 at bats), followed by the fairly bankable giveback run in the bottom half when Cole Hamels gave up a double to Andres Torres that tied the score at 1, which of course whetted the Giants' appetite for the typical 3-run, two-out Hamels implosion the following inning that gave the whiff of the inevitable a pungent adolescent rank. Oh, there were quirks - a deeply frustrating fly ball by Jayson Werth that nearly got the Phils to 4-3 in the 7th, and a quirky strike zone by home plate umpire Dana Demuth that had Phils' broadcaster Larry Anderson crawling into the small foam holes of his microphone. Nonetheless, as the Phils trotted out relievers Danys Baez, Jose Contreras to play out the string after the Phillies' batters were unable to bogart anything as they flailed at the big, crazy monsters that came out of Lincecum's hand, Phillies fans everywhere closed their eyes and thought of England.

The victory lap well underway with one out in the 9th, Lincecum walked Shane Victorino on his 105th pitch. Out of the dugout popped Giants manager Bruce Bochy to a chorus of boos. And then things got really crazy after the jump.

Bochy called upon Proven Closer Brian Wilson, who, if it's been a while since you remembered what Proven Closers do, had four saves already this season, is an All-Star, has a 98-mph fastball, and a spiffy .188 BAbip. And sure enough, he tightened the vise, getting Placido Polanco to hit into the second out. But these are the Phillies of course, so a flame-throwing righty after the best pitcher in baseball meant, of course, that the worm had turned. Chase Utley singled, Howard walked, and with a full count, Jayson Werth sent a ball down the right field line that - for the past week - has been caught by opposing outfielders. But it wasn't. It was also the kind of ball that competent outfielders stop from rolling past them to at least preserve the lead. But it wasn't, as Nate Schierholtz let it roll past him and render useless the canon of an arm that he had showcased the night before (the bat was another matter, as Schierholtz had a banner day at the plate, 5-for-5 with a walk, 3 runs, an RBI). But it wasn't.

David Herndon came in to pitch the bottom of the 9th, possibly pitching for his roster spot with the impending addition of Brad Lidge. He was supposed to come in and cough it up with his brand of bad luck. But he didn't. So on to the 10th we went.

It got crazier. Jeremy Affeldt came in to pitch, and the Phillies, now completely off script, started ad-libbing. Affeldt hit Brian Schneider to lead off. Wilson Valdez bunted him to second. Shane Victorino singled, but Schneider was held on third. So Affeldt (with a lot of help from catcher Bengie Molina) threw a wild pitch that allowed Schneider to score.

So, the luck had finally turned. Good thing too, because Unproven Closer Ryan Madson came in to nail down this wildly improbable victory in the 10th. But he didn't either. That familiar stank started to come back, as Schierholtz led off with a double, and, one out later, Andres Torres knocked him home. I'll fast forward here a bit. There were two outs and runners on second and third. There might have been a better batter in the league than Travis Ishikawa due up, but there wasn't. Madson blew the save, but the game went on.

On to the 11th. Back to the ad-libbing went the Phillies. Ibanez led off and got a single, Francisco, pinch hitting, bunted him to second. Schneider struck out, so naturally Wilson Valdez hit a ball to the left field wall that, on the carom, hit defensive replacement Eugenio Velez on the head as Ibanez scored. With the tweety birds still swirling around him, Velez mangled Shane Victorino's ensuing pop fly to left field for an improbably gifted insurance run. Charlie Manuel then spun the wheel and landed on...

Nelson Figueroa, again providing audition opportunity after audition opportunity for the pending roster move. With one out, Bengie Molina singled. Juan Uribe then hit a ball that caromed off Figueroa and over to Howard, who tossed the ball, presumably, to to some hallucination he saw halfway between first and home, allowing pinch runner Eli Whiteside to move to third. Schierholtz (Schierholtz! The Cody Ross of the NL West!) then doubled Whiteside in, as Uribe moved to third. 7-6 Giants.

With the infield in, Eugenio Velez sent a groundball to Ryan Howard who, in turn, threw home to Brian Schneider. The throw was about six feet toward the first base side, so Schneider caught it and lunged desperately with his glove to the plate as Uribe dived toward home. While attempting to hit the plate with his left hand, he hit Schneider's glove for the second out.

Figueroa and the Phillies, then exhausted by all of this improbable creativity, went back to the big game ending script, as Andres Torres grounded to Chase Utley for the final out. As for Bruce Bochy, he need not be paranoid: People are out to get him tonight. Meanwhile, Phillies fans enjoyed some well-baked munchies at his and his team's expense.

So, with a fresh westerly at their backs, the Phils come home for an early-season showdown with the Mets, whom they still trail by 0.5 games. Oh, and perhaps not since the playoffs have we seen something like this: 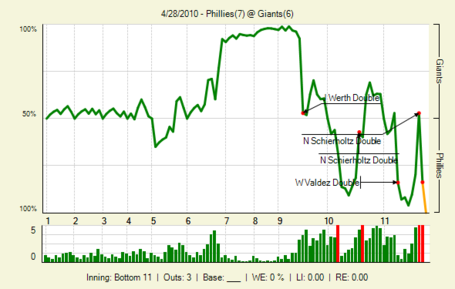