Share All sharing options for: Cole Hamels Facts (and Myths!)

If you've had the misfortune of listening to local sports radio or reading the Comments section of numerous other websites and blogs (or even the blogs themselves) this offseason, you might be left with the impression that Phillies LHP Cole Hamels is a worthless suck of a pitcher, who wilts under pressure and had a fluky run in the 2008 postseason, wherein he posted a 4-0 record and a 1.80 ERA.  I may be exaggerating to make a point, but in general, the short memory of the "die-hard sports fan" strikes again.  Let's break this puppy down, shall we?

MYTH:  "Cole Hamels got lucky in the 2008 season.  He's been an average pitcher outside of that season."

That's three very good to great seasons for a very young starting pitcher still learning his craft.  And a 2009 season that, while certainly not very good, was not atrocious.

More after the jump...

FACT: Even taking away an advanced look at HR rate, BB rate, and K rate -- which demonstrate that Hamels pitched as well in 2009 as he did in 2008 vis-a-vis the things a pitcher can actually control - Hamels' 2009 season was hardly terrible.  He posted a 98 ERA+ -- just below league average -- in 193.2 innings while suffering bad luck on balls in play (.321 BABIP allowed).  Not an All-Star season by any means, but certainly not worthy of demotion or relegation to the bullpen.  Oh, and he did have two shutouts, which is something, isn't it?

MYTH: "Cole Hamels is soft and won't pitch on short rest, if asked."

FACT: I honestly don't know how to debunk this one because there's no basis for it at all.  Even assuming it were true, how many pitchers would you actually want pitching important games on short rest?

MYTH: "The Phillies should have traded Cole Hamels instead of Cliff Lee."

FACT: If you believe this, stop reading this blog right now and getting stupid germs all over it.  Three years of a controlled, below-market pitcher likely to put up similar or possibly better numbers, versus one year for a pitcher (presently injured, just sayin') who is almost certain to bolt in free agency after just one year. 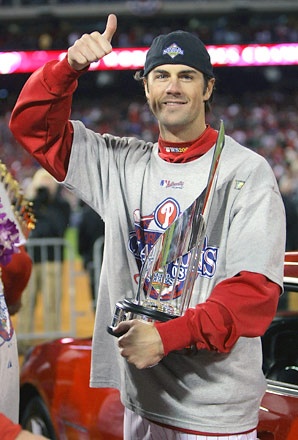 CONCLUSION:  Cole Hamels is just 26 years old -- still a young big league pitcher -- who has already experienced an inordinate amount of success in the Major Leagues.  He has set a very high bar for himself, and the disappointing results he got in 2009 surely frustrated him much more than it did we, the fans.  All these attempts to weave stupid, pointless narratives into his "struggles" ("OMG HE HAS A LITTLE WHITE DOGGY WHAT A HOMO!") only serves to make us look bad, and to obscure the very real fact that Cole Hamels is a HUGE plus to this team now and going forward.  And cut it out with the "Philly likes tough, blue collar players!" bullshit.  You know what kind of players Phillies fans ought to like?  Winners.  Anything else is just your own stupid, baseless prejudice and preferences.

His offseason work on developing a quality third (or fourth?) pitch are not necessarily tacit admissions of failure but an acknowledgment that pitchers need to keep hitters guessing.  To paraphrase Woody Allen, a pitcher is like a shark -- if he doesn't keep moving forward, he dies.  Hamels doesn't want to be that dead shark, and we should be glad.