Share All sharing options for: Double Down: Phillies 8, Nationals 4

It's the kind of game that easily could have been plucked from from the 2009 Phillies game log: The Phillies bats scoring early and often against the inept Nationals' pitching staff, Cole Hamels looking very sharp at times but suffering some bad luck and struggling to put hitters away with two outs, and lasting just five innings as a result.  But the Phillies walked away with an 8-4 victory tonight in Washington, DC.

The Phillies struck first, scoring two runs in the first after loading the bases with no outs.  An even bigger inning may have been thwarted, as Ryan Howard grounded into a double play, resulting in the game's first run.  Placido Polanco scored the game's second run on a wild pitch from Jason Marquis.

The Marlins Nationals struck back in the bottom of the third; after putting the first two hitters away, Hamels allowed a solo home run to Ian Desmond, walked Ryan Zimmerman and Adam Dunn in order, then surrendered an RBI single to Josh Willingham.

Cole Hamels struggled with his control, walking four and allowing five hits, getting pulled from the game after throwing 103 pitches in just five innings.  The Phillies bullpen -- Danys Baez, Antonio Bastardo, Chad Durbin, and Ryan Madson, who recorded a four out save -- allowed just one run and five hits over four innings with one walk.

Carlos Ruiz's nice start continued, with the catcher reaching base three times in five appearances, on two base hits and a walk.

The Phillies go for the sweep tomorrow afternoon at 4:35 p.m. behind Kyle Kendrick. 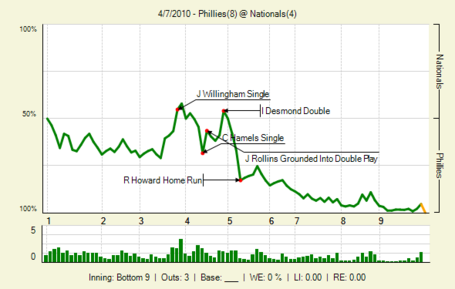