The Phillies' dreams of a 162-0 season were heartbreakingly dashed today in Washington, DC, just 159 games shy of perfection, as the Phillies dropped the final game of their opening three game set against the Nationals by a score of 6-5.

The Phillies quickly found themselves in a 3-0 hole in the first, as starter Kyle Kendrick got knocked around, including with some loud outs, before settling in to retire nine in a row to close the first, second, and third innings.  His good fortune ended in the bottom of the fourth, on a two run home run by Willie Harris.  The Nationals plated their final run in the bottom of the seventh, on a bloop RBI double by Ryan Zimmerman.

The name of the offensive game for the Phillies today was missed opportunities.  Lots of baserunners, scattered across the game, including a kill of Ryan Howard in a run down at home to end the top of the fifth.  The main problem was the 6-8 hitters' (0 for 11) inability to score 4 and 5 hitters Ryan Howard (2 for 4) and Jayson Werth (3 for 5 with three doubles).

The Phillies threatened in the top of the ninth against Nationals' closer Matt Capps.  After a leadoff double from Chase Utley and an intentional walk to Ryan Howard, Werth slammed a long fly to center that advanced Utley as the tying run to third.  Raul Ibanez and Shane Victorino were unable to bring Utley home, and well, that's that.

It's hard to complain about a 2-1 opening series, really, especially in light of the poor starting series of most recent Phillies teams.  I'll take it, but I want to whallop the Astros this weekend. 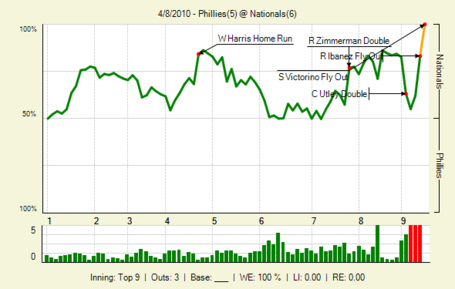