The Phillies returned to start a 10-game homestand against the division-leading New York Mets, and the night was perfect, following a lovely, 72-degree day, a packed ballpark, and fresh off an improbable win that had Phillies fans thinking that a rough patch of away games and injuries was at an end. Closer Brad Lidge was back on the roster, feeling fine. Joe Blanton and Jimmy Rollins were making noises that they might return soon, too. Maybe, just maybe, starting pitcher Kyle Kendrick would take the opportunity to stay on the roster and ground the Mets, possibly saving his spot on the major-league roster. But no sooner was the afternoon sun high in the sky did the injury bug bite again, this time on setup man-turned-interim closer Ryan Madson. And then the Phils lineup started to deal with 23-year-old lefthander Jonathon Niese, whom they had never seen before. It didn't go well.

Before he's banished, perhaps forevermore, to Lehigh Valley, let the record show that Kendrick had a 1-2-3 first inning. He also had a good ball-strike ratio, even throwing a decent number of first-pitch strikes. And he struck out three guys! But beyond that, Lord, he wasn't good. The Mets hit hard fly balls off him, most notably a 2nd inning double by Jason Bay that was followed by a center field bomb of a 2-run home run by David Wright. Then, on an 0-2 pitch, Jeff Francoeur hit a solo home run to left that put the Phillies in an early 3-0 hole and kept another capacity crowd of over 45,000 sitting on its hands for the evening.

The Phillies offense tried to follow suit in the bottom half of the second, as Carlos Ruiz singled home Jayson Werth to close to 3-1, but the real story of that inning were fly balls hit to the fence - one caught by Francoeur off the right field scoreboard that was hit by Raul Ibanez, and the other, hit by Shane Victorino, that was caught by Bay against the left field fence.

After that, no scoring happened until old loathesome buddy Rod Barajas hit a home run on a full count to lead off the 5th. But here we need to digress and mention the performance of Mr. Niese. Perhaps it is as simple as throwing unknown quantities at the Phillies this year that guarantee a pitching gem. Perhaps it is as simple as somethin' ain't quite being right about this supposedly wonderful offense. Perhaps the guy is good. Niese has blown through the Cubs, Braves and Phillies and given up all of two earned runs. On this night he went 7 innings, giving up four hits (two to Werth), walking one, and striking out 7. At one point he retired 12 Phillies in a row.

After the 5th, Manuel went to reliever Danys Baez for the sixth, who set the Mets down in order. The 7th was another riotous story. Baez hit Francoeur with his first pitch of the inning (Francoeur later left the game). Francoeur stole second. Barajas doubled to knock him in, then Baez wild pitched him to third while walking Niese, who was trying to sacrifice. At about this point a fairly intense fistfight broke out in the first row of section 305, high above the right field pole (note to self: fistfights in the first row of the upper deck strike me as a tad, um, stupid). Angel Pagan broke all this tension as he swatted a triple, which nearly precipitated another fight a few rows in front of me before cooler heads prevailed. Manuel then got Baez and brought in David Herndon, who allowed an RBI single to Jose Reyes (charged to Baez), but got through the 8th cleanly.

With the score 8-1, Manuel decided to bring out the newly activated Brad Lidge to see what he could do. He could allow a home run to Rod Barajas and a single to Pagan, which sandwiched a pretty hard-hit out to right field by Frank Catalanotto. There was nothing more to see here, and Manuel curiously got Lidge and his high-80mph repertoire out of the game and let J.C. Romero finish the inning. Move it along, everyone, there is nothing to see here, and with Madson done, Baez an absolute mess, there is no back end of the Phillies bullpen.

And with that, the Phillies fall to third place in the topsy-turvy NL East, behind the Mets and the Nationals. For real for real. 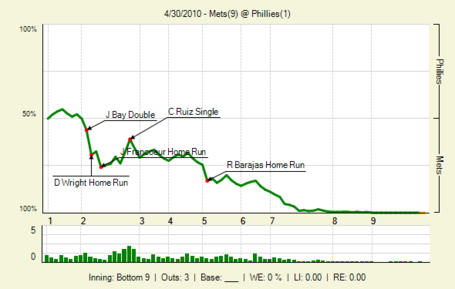