Share All sharing options for: Lock and Gload: Phillies 9, Rockies 5

Eight innings of offensive frustration, including an 0-for-9 with runners in scoring position, and Wilson Valdez's fifth double play in as many games, evaporated in a few short minutes in the ninth inning with a Carlos Ruiz RBI single, and capped with a pinch three-run home run for Ross Gload, that put the Phillies up 9-5.  Jose Contreras, possible closer-in-waiting, pitched a scoreless ninth, allowing just a long double to Jason Giambi.

Prior to that ninth inning, the Phillies offensive output was mostly a direct result of the Rockies' ineptitude, including a run scored on a wild pitch in the sixth inning, and two runs on a botched transfer on a double play ball by the out-of-position third baseman Melvin Mora in the top of the fifth.  Rockies slop-tossing lefty Greg Smith, as is the custom with his particular species, flummoxed the Phillies lefty-heavy lineup.  But he and the Rockies weren't able to hold Carlos Ruiz and switch-hitter Shane Victorino back.  The red-hot catcher was 4-for-5 on the night, including a home run in the sixth inning, and Victorino was 2-for-3 with two triples and three walks.

Kyle Kendrick, after an encouraging start versus St. Louis last week, was pretty awful.  He was hit hard and often, giving up eight hits and four runs in six innings with just one strikeout.  He even balked in a run in the fifth inning.  Lefty J.C. Romero was again unimpressive, getting just one out in the seventh, surrendering two hits and a run, in an inning that would have been so much worse if not for a David Herndon-induced, fantastic but almost ordinary-for-him double play turned by Chase Utley, preserving the 5-5 tie.

Sometimes you win ugly.  That's about all I have to say. 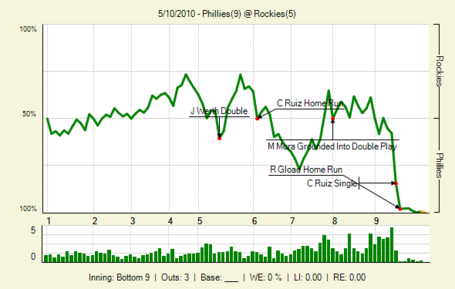