.... that during a Phillies/Mets game, Mr. Met, convinced he had evidence of Phillies sign stealing, staged a sit-in protest on home plate until his request to plead his case to the umpire crew was granted. After the umpires, laughing hysterically, dismissed Mr. Met's claim that the Phanatic conveyed stolen signs with his "'whammy" dance and hip gyrations, the angered mascot began chasing the umpires at which point, he was justifiably tased into submission by the Phanatic.
So, as it seems customary at TGP to deal with the trials and tribulations we endure as Philadelphia sports fans with creativity and humor, I, in light of the recent events, tried to render a scene from this dream with Photoshop, but as I am a bit Adobe dumb, my attempt to frankenstein all the mascot body parts I cut from various jpegs to a news photo I choose for a base, failed. However, refusing to let the 3 hrs. spent go to waste, I decided to use the same photo and instead, just drew it. I think it's done, although it could use a caption. 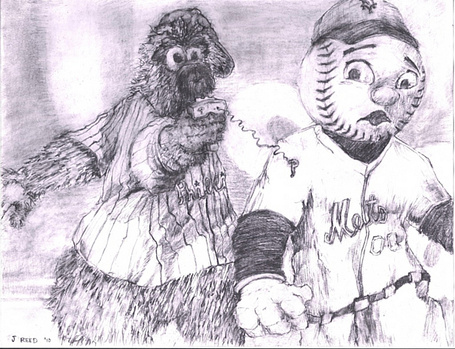