The two highest scoring teams in the National League met tonight in Milwaukee, and some baseballs got abused.  Three home runs for each team, with all of the Brewers' coming in the second inning, but the Phillies produced some offense beyond the long ball, and outlasted the Brewers by a score of 9-5.

Wearing the classic 1970 vintage powder blue road uniforms, the Phillies offense got going in the top of the first, with a long two run home run from Ryan Howard of Brewers' starter Randy Wolf.  After scoring another run in the top of the second, Jamie Moyer proceeded to allow the long home runs to Prince Fielder, Jim Edmonds, and George Kottaras.  Fortunately, they were all solo bombs, and the Brewers were never able to take the lead in the contest.

Third Stringers Paul Hoover and Wilson Valdez both had nice nights at the dish, with Hoover going 1-for-3 with a walk and two runs scored, and Valdez going 2-for-5 with a double and a triple.  Shane Victorino was 3-for-5, and Raul Ibanez was 2-for-5 with a long home run.

After a few really ugly at-bats, Chase Utley came around with a home run in the top of the ninth that put the Phillies up 9-5.

A solid victory, and aside from the brutal second inning, Moyer did not pitch terribly.

A good night for the Philadelphia Sportsmen all around! 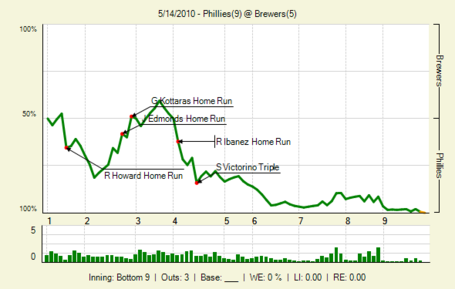