On a day when the Phillies’ 4-5-6 hitters went a combined 2 for 11, the team nonetheless racked up 10 runs on 17 hits to down the pitching-starved Brewers in Milwaukee. Shane Victorino went 3 for 6 with a single, double and homer, two runs scored and four RBI, while Placido Polanco had four hits and Chase Utley added two, both doubles. The bottom of the lineup did the rest of the work, with third-stringers Wilson Valdez and Paul Hoover combining for five hits and four runs. Even pitcher Joe Blanton went 1 for 3, scoring twice.

The Phils put Brewers starter Chris Narveson under siege almost immediately, loading the bases in the first before the Milwaukee lefty escaped. He wasn’t as lucky in the second, however, as Hoover led off with a single and Gregg Zaun airmailed a throw to second on Blanton’s attempted sacrifice. Victorino scored Hoover with a single, and after Polanco struck out, Utley stroked a liner off the right field wall that replays showed Brewers outfielder Corey Hart actually kicked over the wall—which should have meant a home run for Utley. But the umpires called it a ground-rule double, and the inning ended with two runs in and two left in scoring position.

Blanton cruised through the first four innings facing the minimum twelve hitters, but saw his lead cut in half when Prince Fielder crushed a long solo homer to start the bottom of the fifth. A two-run Victorino homer stretched the lead to 4-1 in the next inning, but pinch-hitter Alcides Escobar brought the Brewers within two runs with Milwaukee’s fifth solo shot in fifteen innings. The Phils seemed to blow it open by scoring five in the seventh, with a two-run Hoover double the big blow. Blanton stayed in for the bottom of the inning, to his detriment: after a leadoff double to Fielder and two strikeouts, he walked Zaun and surrendered a three-run blast to Hart. The Phils got one of the runs back in the top of the eighth, when Ibanez scored on a Hoover double play grounder.

Hart struck again when the Brewers made a charge against overmatched Rule 5 reliever David Herndon in the ninth. After recording the first out, Herndon surrendered a double to Jody Gerut, lost a long battle with Zaun when the catcher singled, then gave up a run-scoring double to Hart that made the score 10-6 and put men on second and third. Herndon gave way to Jose Contreras, who brought the tying run to the plate by walking pinch-hitter George Kotteras. But the aged Cuban rallied to strike out Rickie Weeks and Craig Counsell and earn his first career save. If you didn't watch, trust me when I say that the graph below doesn't really indicate how scary things looked for a minute there: 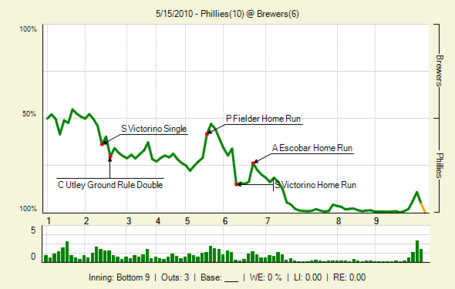 The Phils go for the sweep Sunday night when Cole Hamels faces Doug Davis in the series finale.