Okay, I just had this entire game recap written and was uploading the Fangraph when Safari crashed, losing everything, and this was a 4-2 game that nonetheless took well over three hours to play, on a school night. So this is gonna be brief:

Cole Hamels wasn't at his overpowering best through 6 2/3 innings in Milwaukee Sunday night, but he avoided the killer inning that's bedeviled him in too many starts since the 2008 World Series, and even got some good luck on balls in play for a change as he earned his fourth win in six decisions on the 2010 season. Staked to a 1-0 lead, Hamels loaded the bases in the first inning on two walks and a single, but escaped trouble when Corey Hart flied out to deep center. More important, he  was helped out by superior defense all night long: Paul Hoover throwing out Hart trying to steal to end the fourth, Placido Polanco robbing Alcides Escobar with a man on third and two outs in the fifth. Though Hamels didn't record a clean inning all night, he held the Brewers scoreless until Casey McGehee and Hart clubbed consecutive solo homers with two outs in the sixth.

Meanwhile, the Phillies kept emergency starter Dave Bush under siege all night, but managed only three runs in six innings while stranding nine. They got a key insurance run in the eighth when, with two outs and runners on the corners, Carlos Villanueva struck out Chase Utley on a breaking ball but Brewers catcher Gregg Zaun couldn't handle the pitch, allowing Shane Victorino to score. Milwaukee threatened against Danys Baez in the bottom of the eighth, as Ryan Braun and Prince Fielder singled to start the inning. But McGehee grounded into a pretty 4-6-3 double play, and Wilson Valdez went deep into the hole to rob Hart and end the inning. J.C. Romero worked a 1-2-3 ninth to earn the save, lifting the Phils ten games over .500 on the year and stretching their NL East lead to four games over the Nationals and Marlins.

Now, as to that Fangraph: 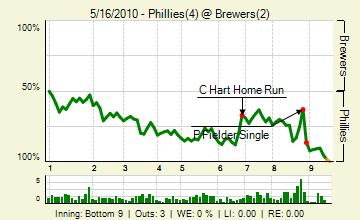