The Phillies welcomed Jimmy Rollins back to the club after a month on the disabled list, and the shortstop looked like he hadn't missed a beat, going 2-for-4 with a walk and two runs scored as the Phillies pummeled their cross-state rival Pirates by a score of 12-2.

The game didn't start so hot for the Phillies, with starter Kyle Kendrick surrendering a leadoff home run to Delwyn Young.  After that, it was mostly smooth sailing for Kendrick, who went a career-high eight innings, allowing two runs on just five hits, with four strikeouts and a terrific 15 groundouts.

The offense was, once again, spectacular, even with Chase Utley getting the night off due to illness.  The score was knotted at one run apiece until the bottom of the fourth, when Ryan Howard knocked in two runs with a bases loaded single to left field, and was immediately followed with an opposite field homer from Jayson Werth, his eighth on the season, off Pittsburgh starter Charlie Morton.

Ryan Howard then delivered the final indignity in the bottom of the eighth inning, a titanic grand slam home run to centerfield off reliever and one-time Phillie Jack Taschner, to cap off his 3-for-5, six RBI night. 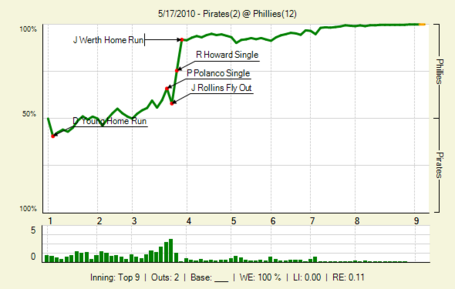