Moreso than any other sport, baseball gives us unlikely outcomes on a given day.  So when Phillies ace Roy Halladay falls to the Pittsburgh Pirates, you just kind of say, "Eh?"

Zach Duke, to his credit, pitched very well, allowing a single run on six hits and two walks in his six innings pitched.  The lineup, minus Chase Utley and Raul Ibanez, struggled to string together enough hits to plate more than a single run.

The Phillies defense was subpar, with three errors, including a dropped ball at home plate by Carlos Ruiz that allowed the Pirates' second run to score.

Roy Halladay labored, pitching a complete game and throwing 132 pitches, once again talking Charlie Manuel into leaving him in the game with 126 pitches and two out in the top of the ninth.  The 132 pitches are the most for any pitcher in the Majors this season.  Nonetheless, he allowed just two runs on nine hits on a walk, with six strikeouts.

Not much else to say, other than Ryan Howard getting three hits, all off lefty starter Zach Duke. 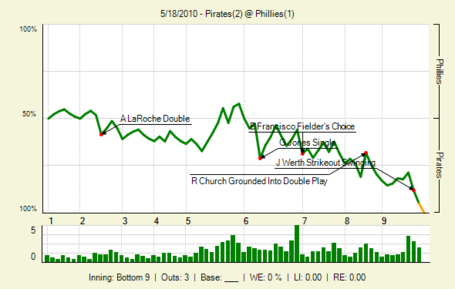