Share All sharing options for: It Stinks: Cubs 4, Phillies 1

Another strong pitching performance from a Phillies starter, another somewhat better performance from an opposing lefty starter, lots of hard hit balls right at the other guys (including off the pitcher's hand), and a 4-1 loss at home.

Jamie Moyer had another very strong outing, going seven innings and giving up two runs, both on singles that were deflected off the glove of Placido Polanco.  Moyer struck out seven (!) and surrendered just four hits in a tough luck loss.  Bullpen Gruesome Twosome Chad Durbin and J.C. Romero coughed up another two runs in the top of the ninth to all but put the game out of reach.

The Cubs Tom Gorzelanny was very effective but benefited from some good luck on some very hard hit balls by Phillies batters, including a line drive off the bat of Carlos Ruiz in the bottom of the seventh that struck Gorzelanny on the hand and knocked him out of the game (X-rays after the game were negative as to any fracture, thankfully).  Still, you have to score runs, and the Phillies just weren't able to string together enough hits.

Carlos Marmol closed the game out for the Cubs, but not without some drama.  After retiring Jimmy Rollins to start the inning, Marmol issued a walk to Raul Ibanez, and hit Carlos Ruiz with a pitch, before striking out pinch hitter Ross Gload and Shane Victorino.

The Phillies scored their sole run in the bottom of the eighth on an RBI groundout from Ryan Howard.  Jayson Werth with a bad night, 0-for-4 with two strikeouts. 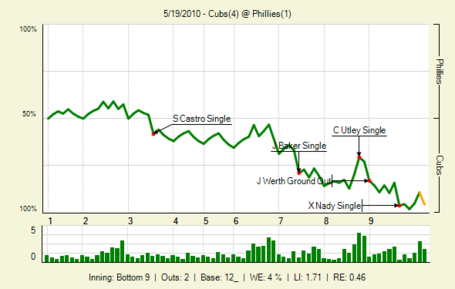