Share All sharing options for: Fun with Bullpens: Phillies 5, Cubs 4

The first 4 innings of this game felt like they took 12 minutes to complete.  Aside from a Chase Utley homer in the bottom of the first, both Ryan Dempster and Joe Blanton were ruthlessly efficient, and it became fair to wonder if Blanton could go the distance on something like 90 pitches.

The pace slowed substantially in the middle frames, however, as a Starlin Castro RBI single in the fifth, a Jimmy Rollins 2-out, 3-run homer in the sixth, and a 2-run Cubs top of the seventh (including a Derrek Lee solo job) chased both starters and handed a 4-3 game over to the bullpens.  And that's when the fun started.

Manuel went to Antonio Bastardo in the top of the eighth to be, quite literally, a LOOGY.  But after getting ahead of Kosuke Fukudome 1-2, the diminutive southpaw left a fastball inner half that the Cubs' leadoff man yanked into the right field seats to tie the game up.  In came Danys Baez to face the rest of the Cubs' right-leaning lineup, and after falling behind 3-0 to Ryan Theriot, he recovered to retire Theriot on a grounder, Lee on a pop up, and erstwhile Phillies prospect Marlon Byrd via the strikeout.

It was then Lou Piniella's turn to play reliever roulette, and he tabbed his best lefty, John Grabow, to pitch to the heart of the Phillies order in the bottom half of the frame.  Walks by Utley and Rollins brought Raul Ibanez to the plate with runners on first and second and two outs, and Grabow promptly surrendered an RBI single to the Phils' left fielder (who had been 8-for-40 against southpaws heading into this game) to give the hometown nine a 5-4 advantage.

That left just the final act, starring newly minted closer Jose Contreras.  The Big Truck -- his newly minted nickname, apparently -- continued the roller coaster by hitting Alfonso Soriano after an 11-pitch at bat, then saw a Mike Fontenot single put runners at the corners with nobody out.  Contreras settled down to strike out Starlin and pinch hitter Aramis Ramirez, then induce a foul pop up from Geovany Soto to end it.  It was a 31-pitch inning from the big Cuban, but it got the job done.

The win breaks the mini skid by the Phillies in advance of the beginning of interleague play this weekend.  In the meantime, feel free to take a ride on the Bullpen Express, Philadelphia's favorite new roller coaster... 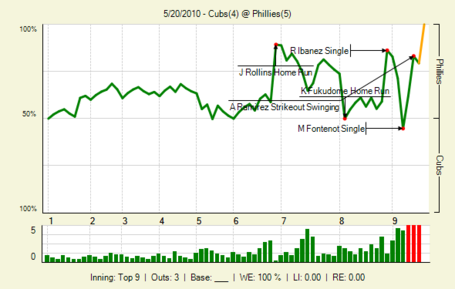