Share All sharing options for: Dice-Krapped Out: Red Sox 5, Phillies 0

The second game of interleague play for the Phillies began with more than its fair share of uneasy qualms and poor omens. First, the Phillies announced that Jimmy Rollins once again went to the 15-day disabled list with a strained right calf, for the second time this season (which meant understudy Juan Castro and the waived-and-called-back Wilson Valdez to fill in on the bench). Second, well, it was interleague play. And third, the Phillies were facing a righthanded pitcher with a 7.89 ERA and a 1.52 WHIP in Daisuke Matsuzaka, which meant, of course, doom.

Doom! I tells ya.

Dice-K no-hit the Phillies through seven innings, aided by some notable-to-slick-to-tremendously lucky defensive plays (Dustin Pedroia snagged a Chase Utley line drive and then doubled off Placido Polanco in the first; Matsuzaka snagged a hard-hit line drive off of Jayson Werth's bat to end the seventh. Those plays paled in comparison to Adrian Beltre's catch of Carlos Ruiz' line smash (again, doubling off a runner, this time Raul Ibanez) for the first two outs. But then Juan Castro hit a flare just over the ball of Marco Scutaro to break up the no-hitter, which was recognized by a nice standing ovation by the 64th straight sellout crowd at Citizens Bank Park.

Interesting side note: FOX cameras and microphones had caught Rollins counseling Castro prior to his at-bat with words to the effect, "There's a zero up there...you gotta take chances." So credit Rollins with the assist on the hit. (Scutaro also apologized to the entire country of Japan in his postgame comments, his samurai sword glistening in the background of his locker.)

Had Matsuzaka managed to no-hit the Phillies, hewould have done so with some odd asterisks, not least of which four walks, two of them to Placido Polanco and another to Kendrick. Nonetheless, the Sox' baffling righthander and Japan League bonus baby, who entered the game with a season record not terribly unlike his pitching counterpart's, consistently flummoxed the Phillies with his repertoire of off-speed pitches.

Daniel Bard came in to finish off the Phillies in the 9th inning on three measly ground-outs to second.

Kyle Kendrick had one of his typically vile performances, where he did all the Little Things(TM) wrong, like putting leadoff runners on, and Not Being Able to Put Away Guys with Two Strikes (and/or Two Outs), giving up a hit to the (AL) pitcher, then allowing a few softly hit balls before the dam burst in the fifth inning.

Scutaro led off with a first-pitch double, followed by Matsuzaka's sacrifice bunt. After a walk to Jacoby Ellsbury, Pedroia popped out to Chase Utley, and the way out of the inning was clear, right? Wrong. J. D. Drew then hit a soft single to left that scored Scutaro. Consecutive doubles by David Ortiz and Adrian Beltre then chased Kendrick, and it was 5-0 Red Sox.

To be somewhat fair, Kendrick wasn't helped by his defense, especially when, in the fourth inning, Jeremy Hermida's fly ball to shallow center field turned into a sacrifice fly when Raul Ibanez's throw to the plate bounced twice (!) and was slighty up the line (!) in an attempt to throw out the lumbering David Ortiz (!!!). The boys in the back rooms all over Vegas stumbled all over each other after that to move their money to "Never" after that one.

Honorable mention to the Phillies bullpen on this night. In the shadows of Matsuzaka's drama, Antonio Bastardo stopped the bleeding in the fifth, then came out to pitch a scoreless sixth. Nelson Figueroa relieved with a scoreless seventh, and David Herdon in the 8th. All told, it was 4 1/3 innings of 1-hit, 1-walk ball. So take that, Dice K: Kyle Kendrick really is a difference-maker.

Get out your butterfly nets. Knuckleballer Tim Wakefield goes up against Roy Halladay tomorrow afternoon. 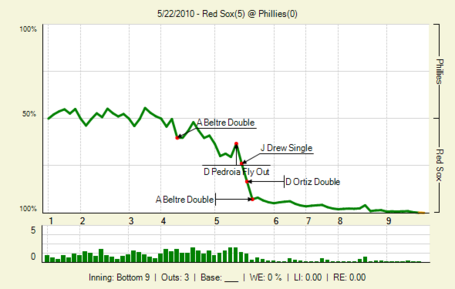