The Phillies had their chances, particularly early, loading the bases with no outs in the second inning, only to see a struggling Carlos Ruiz hit into a 1-2-3 double play, with shortstop Juan Castro retired without harm.  The Phillies again loaded the bases in the third, but again walked away with nothing to show for it.

Jamie Moyer, while not particularly sharp, was far from terrible.  The defense abandoned him in the fourth inning, when Shane Victorino lost a pop fly in the bottom of the fourth off the bat of David Wright.  The ball dropped in, and Wright later scored.

The Mets scored exactly one run in five of the first six innings, slowly bleeding the Phillies to death, as the Phillies proceeded to strand 13 baserunners without scoring a single run.

In the bottom of the sixth inning, a one out double from Jeff Francoeur followed by an RBI single from Chris Carter led to the Mets' fifth run.

The Phillies had another great opportunity to put runs on the board in the bottom of the seventh, when Shane Victorino led off with a walk, and advanced to third on a double by Placido Polanco.  However, the middle of the lineup just kept struggling, as lefty Raul Valdes struck out Chase Utley and Ryan Howard, and induced a groundout from Jayson Werth to end the threat.

R.A. Dickey tied a career high with seven strikeouts.  Seriously.  Valdes pitched the final three innings for the Save.

Undoubtedly the ugliest game of the season, on the heels of two truly awful games over the weekend against the Red Sox.  Let us never speak of it again. 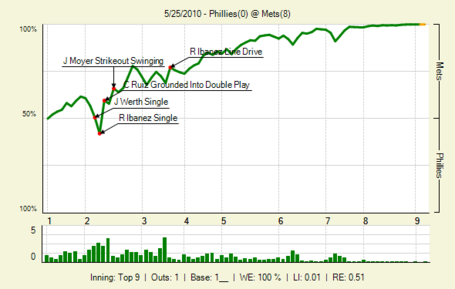