It's a Magic Number: Phillies 3, Marlins 2

Share All sharing options for: It's a Magic Number: Phillies 3, Marlins 2

Through the early innings of Friday night's series opener against the Marlins in Miami, the Phillies stayed distressingly on-script: a first-and-third, one out scoring opportunity in the first inning squandered, a double play in the second to kill another potential scoring chance, an egregious error committed in the bottom of the third by pitcher Kyle Kendrick, on a Hanley Ramirez comebacker with two men on that Kendrick threw down the right field line, allowing two runs to score... which at that point probably felt more like twenty.

A Phillie finally crossed home plate in the next half-inning,  when Ryan Howard led off with a single and Raul Ibanez tripled him home. But while the 30-inning scoreless streak was at an end, the offensive futility was not: Ibanez stayed rooted at third, as Ross Gload and Greg Dobbs both struck out, as did Kendrick after an intentional walk to Carlos Ruiz. Still, the Phils evidently liked the experience of scoring so much that they did it again in the fifth: with two outs, Chase Utley walked, stole second and came around on Howard's RBI single, knotting the score at 2. Two innings later, they went ahead after Shane Victorino and Wilson Valdez executed a double steal and Utley's RBI groundout plated Victorino.

Kendrick and three relievers made the lead stand up. In his six innings, Kendrick limited the Marlins to five hits--all singles--and walked none. He struck out just one--Ramirez, looking, to end the first inning--but pounded the zone enough to record ten ground ball outs. Chad Durbin and Danys Baez each pitched a scoreless inning of relief, and interim closer Jose Contreras struck out Ramirez to start the ninth, then surrendered singles to Jorge Cantu and Dan Uggla before fanning Cody Ross and inducing Ronny Paulino to fly out to end the game. 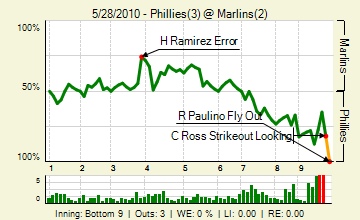