Another close game, another game blown wide open by bullpen blundering.  Tonight, the culprit was Nelson Figueroa, who gave up a bases clearing double to David Freese in the top of the seventh inning that made the score 5-1.  A single by Colby Rasmus made the score 6-1, and despite solo home runs by Jayson Werth in the seventh, and Chase Utley in the ninth, the Phillies were unable to make up the deficit, falling to the Cardinals by a score of 6-3.

Cardinals started Jamie Garcia was sharp, surrendering just one run on three hits and four walks in six innings pitched.  The lefty stymied the heart of the Phillies order, including Ryan Howard, who finished the night 0-for-4 with three strikeouts.

The game wasn't without its encouraging points.  First and foremost, Joe Blanton's first start of the season was a solid success.  The box score belies how well he pitched; his location was very good and his breaking stuff was sharp.  In the seventh inning, likely fatigued, he started elevating pitches, leading to a couple of hard hit balls, including a pinch hit homer by Nick Stavinoha that broke a 1-1 tie.

Second, a strong ninth inning from Brad Lidge.  Lidge touched 94 MPH with his fastball, and his slider was sharp.  Although he surrendered a hard-hit double to Matt Holliday, it was his only baserunner allowed.  With all the bullpen tragedies of the past couple of weeks, a quality Brad Lidge would be a godsend.

Phillies manager Charlie Manuel was ejected in the fifth inning for arguing on a bunk call of interference on Joe Blanton, who was attempting to reach first on a poorly executed bunt and bumped into Skip Schumaker, who was covering the bag.  The throw was wide and Blanton remained in the baseline.

There were also two unusual delays to the game -- first, an official review of a possible home run ball by Chase Utley in the bottom of the first.  The review showed that the ball went just foul, but was one of a few well-hit balls by Utley on the night.  Second, a spectator ran onto the field and got taken down by a taser.  Yes really.

With the New York Mets falling 3-2 in 11 innings to the Reds, the Phillies maintain a half-game lead on first place in the NL East. 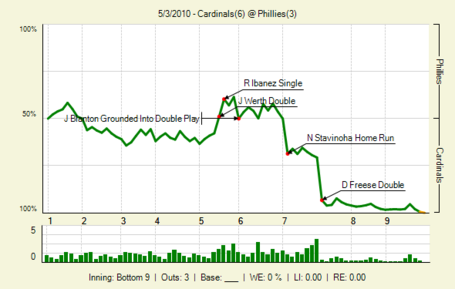