Share All sharing options for: It's the Same Old Song: Braves 9, Phillies 3

Pretty much says it all: 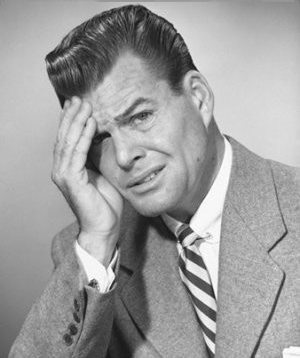 Actually, today's game did feature a bit of a change of pace, in that the Phillies did score three runs today, all in the top of the seventh, when four straight hitters (Raul Ibanez, Carlos Ruiz, Wilson Valdez, and Ben Francisco) doubled. But that would be all she wrote for the Phils' lineup. And otherwise, pretty much everything that could go wrong did.

Offensively, the Phillies threatened in both the first and second innings against a wild Tommy Hanson (who ended up giving up one run in six-and-two-thirds innings, with three walks and only two strikeouts). But they promptly bailed Hanson out with inning-ending double-play ground balls in both innings, never mind the fact that Hanson isn't a groundball pitcher. The Phillies would finish the game with only six hits, including the four seventh-inning doubles.

Starting pitching-wise, Joe Blanton reversed his early-season pattern of starting strong and hitting a wall. Instead, he gave up a two-run homer to Chipper Jones right out of the gate. The first two outs of the first inning were recorded on deep fly balls caught on the warning track. A third run scored in the first on a deep fly that Ross Gload (playing right in place of Jayson Werth today) dropped for an error. Three more Braves would score in the third, although two of those three runs were probably the fault of Ryan Howard, who let a probably double-play ball go under his glove for an error. While Blanton would then settle down, the damage was done.

The bullpen also failed to cover itself in glory. After the Phillies' three-run outburst in the seventh, Antonio Bastardo entered the game and gave up a one-out hit to Jones and a walk to Brian McCann. Chad Durbin then came in to face the suddenly resurgent Troy Glaus, and promptly gave up a first-pitch three-run homer, putting the game away. (On the bright side, Brad Lidge pitched a one-two-three eighth inning in his first appearance since being activated from the DL.)

Oh, and also, Charlie Manuel was ejected from a game, arguing a call that was probably correct.

All in all, this was a stone cold butt-kicking: the worst second-worst margin of defeat the Phillies have suffered since their slump began a week-and-a-half ago. After enjoying a five-game lead as recently as May 17, the Phillies now, on May 31, find themselves in second place by a half-game to the red-hot Braves, who are now 19-4 in their last 23. June couldn't come quickly enough.