Of Chooch and Cole: Phillies 2, Cardinals 1

Share All sharing options for: Of Chooch and Cole: Phillies 2, Cardinals 1

Going into tonight's game, it appeared more than likely that runs would be hard to come by, and it played out that way.  Cy Young candidate Adam Wainwright held the Phillies to just one run and four hits in his eight innings.  But he was arguably outpitched by Cole Hamels.

Hamels had another terrific outing, striking out eight in eight-plus innings pitched, and not surrendering a run until the ninth inning, allowing back to back doubles to lead off the inning.  He was relieved by Brad Lidge, who showed more signs of a return to 2008 form with a solid inning, ending the threat with no more runs and preserving a 1-1 tie.

After a dominant top of the 10th from Jose Contreras, who is quickly looking more and more like the quality bullpen arm this team desperately needs, all eyes were on Carlos Ruiz, who did not disappoint, knocking the ball into the first row of the left field grandstand for a 2-1 walkoff win.

Some good takeaways from tonight's game, even if the offense didn't exactly light up the scoreboard.  But it was Adam Wainwright, so it's understandable. 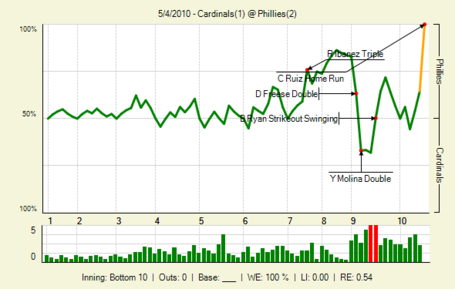