Phriday Phillies Links Phor You: May 7, 2010 - Goodbye, Robin Roberts; The Rest Are Details

Share All sharing options for: Phriday Phillies Links Phor You: May 7, 2010 - Goodbye, Robin Roberts; The Rest Are Details 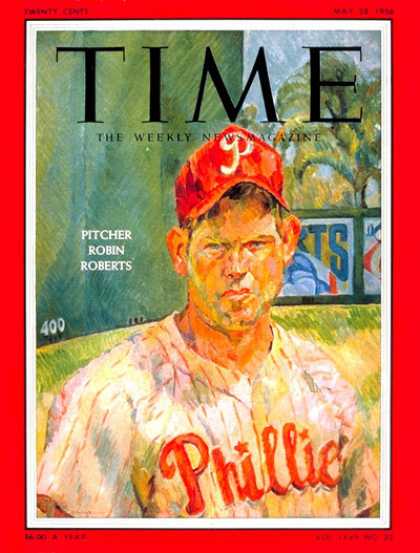 When Robin Roberts went to Cooperstown in 1976, it had been nearly 40 years since a Phillies pitcher was inducted into the Hall of Fame (Grover Cleveland Alexander was enshrined in 1938), a testament to both Roberts' individual greatness and the pathos that once was the Philadelphia Phillies. If Kyle Kendrick does nothing else in his career, I will always have a kind thought that his improbable win on Wednesday versus the mighty Cardinals was the last game Roberts saw on Earth.

You were good, Whiz Kid. Rest in peace.

I am just very thrilled to be here this day. The Hall of Fame people I’d like to say were very nice. I only had one request for them that they turned down. I asked Kenny Smith if he didn’t think it would be appropriate if I would invite everyone that ever hit a home run off me to be here today. And Kenny said Cooperstown wasn’t big enough. But I am going to have little cards made up that say, "I hit a home run off Robbie" and mail it to all those gentlemen because I’m sure they’d like to have it in their wallet. There was a lot of them, by the way.

Phillies jersey No. 36 will be hung in the team's dugout during games for the remainder of the season, that players will wear No. 36 patches on the right sleeves of their uniforms beginning Friday, and that the 1950 pennant will be hung at half-staff at Citizens Bank Park.

So when Werth homered in the first inning, he pointed to the sky as he crossed home plate.

"I don't usually do that sort of thing," Werth said. "Definitely Robin was on the thoughts and hearts of many people today. As I was coming around third, I definitely had him on my mind. That was big ups to Robin right there."

The other links are just details today. Jump for more.

Fitzpatrick: A bright star in a dark era. This is my favorite tribute to Roberts. Please read.

Many years later, when I was this paper's Phillies beat writer, I met Roberts again in Clearwater, Fla. After I'd gotten the answers I needed for a story, I got the nerve to ask him how he'd been able to pitch so well for teams that were so bad.

"Frank," he said in a tone that suggested I'd be wise to listen carefully, "if you worked for a newspaper that wasn't as good as The Inquirer, would your stories be any different? It's all about pride in your work. And in yourself."

Lyon: The complete pitcher. You'll have to bear with the Old Guard lamenting the death of the complete-game pitcher  today. Left to us will be the task of writing obituaries of the thousands of guys whose arms with normal human physiology were shredded before they were out of A ball.

Now, I want all you pitch-count advocates to cover your eyes. And if you're coaching your Little League kid to be the next 75-pitch wonder, hide the newspaper, the laptop or the iPod.

Sure, Bill, but what's a newspaper?

Rollins sent to Fla. for rehab work. Good news! His right calf has already submitted to a higher authority. (Note: this was yesterday's link, and I apologize, as WC placed the call to the linkpen and I was snoozing when the phone rang. I got no hustle, skip, no heart neither.)

Braves-Phillies preview. And matchups. I would have to be going to tonight's game, of course, as with the exception of last Saturday's gem, I've been on the Kendrick and Moyer ticket plan. I'm bringing my palm to welcome sweet Jeebus, April Rookie of the Month to Philadelphia.

Manuel said Castro will likely miss tonight's game against the Braves, but is not expected to be sidelined for a lengthy amount of time.

The price isn't right anymore for fans. They vow they can stop anytime they want, so they're staying away in droves. Oh, wait.

TIgers fans say goodbye to Ernie Harwell. All day long at Comerica, fans filed by. Idle thought, but I wonder how guys like Tom McCarthy and Chris Wheeler make sense of these tributes.

Braves Battle Back in 8th, but Fall 3-2 in the 9th. (Talking Chop). Braves were no hit through 7 1/3 innings by the Nats' improbable Scott Olsen. Tough loss for the Braves, who send Derek Lowe to the mound tonight against Jamie Moyer.

Giants sweep Marlins, 6-3. (mlb.com). Matt Cain held the Marlins hitless until the 6th (and from the looks of the video highlights, fanless the entire game), and old buddy Aaron Rowand is a one-man wrecking crew these days.

Someone Help the Mets (FanGraphs). For you fans of Mets schadenfreude. You know who you are. So click it already!

Portland 7, Reading 6. Tyson Gillies 3-5 with a stolen base to hike his average to .242. Homestand begins with fireworks tonight in Baseballtown!