One for the Aged: Phillies 7, Braves 0

Share All sharing options for: One for the Aged: Phillies 7, Braves 0

I am telling you all. I saw this. In person, too, from a perch high in section 419. If I had seen it on TV, I might have thought it to be some kind of cleverly disguised, special effect'd charade, a kind of strange baseball pageant akin to late Soviet-era parades designed to convince us all that Leonid Breznev was still alive and fully in control, as soldiers marched impressively around the block wearing cardboard belts and such.

And yet, here is this scorecard, in front of me. Jamie Moyer, at age 47, pitched a complete game shutout against the Atlanta Braves, becoming the oldest person in major league history ever to have done so. Granted: it was a lineup devoid of Jason Heyward and Brian McCann, and one that had nearly checked into a local crisis center after nearly getting no-hit by the Nationals' Scott Olsen the night before. Moyer faced only one batter over the minimum, and only first baseman Troy Glaus was able to get hits (two) off of him. He threw 9 groundouts (one GIDP), 12 fly outs, and struck out five. He walked no one.

Mind you don't pull anything as you follow me over the jump for details.

Top of the world, Jamie Moyer! 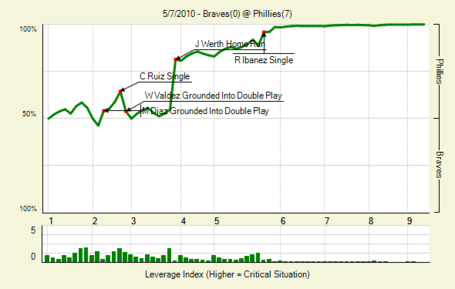 Some other game highlights: