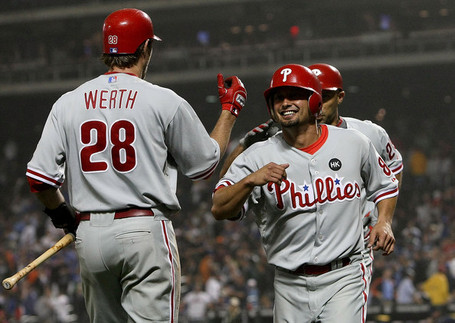 Here's a hypothetical question for y'alls.

1. Work out a trade, in which you would get no more than a nominal return in exchange for either (a) Raul Ibanez while assuming, let's say, 1/3 of his remaining salary, or (b) Shane Victorino,

2. Work out an extension with Jayson Werth's agent for, let's say, 5 more years at $20 million per year.

Would you do it?

This is the only way I can see Werth realistically remaining in Philadelphia after 2010.

Note the cons for the trade:

1. You would have to live with a D. Brown/Francisco/Mayberry/Dobbs mashup in either left field or right field for the remainder of 2010, including the postseason. This is very likely to be a step down from Ibanez or Victorino (whichever one is traded) for the rest of this year.

2. You would have about $8 million less to spend this offseason on other needs for 2011.

3. You would be committing the team to pay $20 million to Werth in his age-36 season.

4. You would lose two draft picks that you would otherwise get.

5. I doubt this would go over too well in the clubhouse. I know we generally don't give much truck to "clubhouse" issues here because they tend to get wildly overstated among traditional commentators, but they're still legitimate as a secondary consideration. If this scenario were to play out, could it create a feeling of betrayal or disloyalty among the remaining core players? Could it lead to any resentment toward Brown (or, for that matter, toward Werth)? Brown is pretty much destined to be placed under immense pressure regardless of how or when he eventually gets to Philadelphia. This scenario would just about maximize that level of pressure.