Share All sharing options for: A Win! Phillies 6, Yankees 3

This is a funny game.  Roy Halladay is blown out by the Yankees one night.  The next night, Jamie Moyer, he of the line of 9 runs in 1 inning last time out, shuts down the same team.

And by "shuts down," I mean totally dominated.  In 8 innings, Moyer allowed 3 hits and 1 walk, striking out 5.  The Yankees were helpless against him.  The only two runs he allowed were solo homers to Robinson Cano and Jorge Posada.  Brad Lidge came in in the ninth and struggled.  He got 2 strikes on each of his last four batters, but couldn't put Mark Teixiera, Alex Rodriguez, and Robinson Cano away, allowing each to reach base and a run to score.  Manuel left him in there to face Posada, who also got to two strikes, but eventually struck out on a nasty slider.

The Phillies offense showed up for the game, although still not in high powered form.  The team knocked out six hits for six runs, with Shane Victorino providing a bases-loaded triple and Ryan Howard and Jayson Werth each hitting solo shots.

We'll take anything at this point, so I'll say this is a sign of good things to come.  Right? 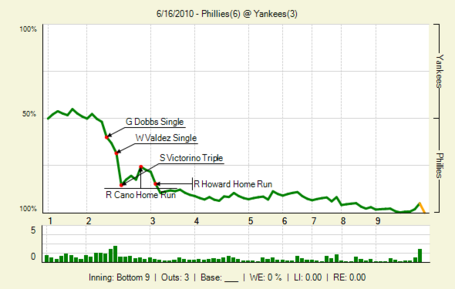