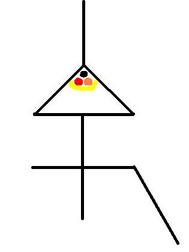 Phillies Taking Nothing for Granted During Slide Video of our New Bat God, the Jobu Homage. Zolecki reports that Utley was the culprit, which kind of makes sense, as I'm not sure that even Vic has the stones to touch Utley's bats. Anyways, in today's comments thread I want us to give our new god a name.

Phillies top the Yankees, 6-3. Perhaps we should have started Moyer in the Series. /Spilled milk'd.

Phillies want Rollins to play full game. I'll be greedy and ask for a full month. I'm like that.

Phillies GM Ruben Amaro admits contact with Pedro Martinez' agent but downplays interest in pitcher. There's really nothing left to read after a headline like that, but go'head if u wanna.

Hagen: A wait-and-see approach with the Phillies. So he went ahaid.

Amaro and aides meet with Manuel and coaches. Nobody's talking, but my hunch is transactions are probably brewing.

McCaffery: Phils haven't showed much in reserve. I'm not saying it's good stuff, but the Delco Times' Jack McCaffery is quickly becoming my go-to guy for NO DUH Phillies analysis + Amaro bashing. And the comments are gifts that keep on giving.

GCobb: Phillies "would love" to get Cliff Lee back. H/T PhillyFriar for tipping me on this one, whose commentary follows. Here's the money quote:

We know that Dom Brown ain’t going anywhere, so forget that. That would be an awful decision. How about packaging Kyle Kendrick and Greg Dobbs? Is that too much to give up for Lee?

I mean, if the M's are making a run at Anthony Rendon, then I'm sure they'd just love to add a couple of sub-replacement level players.  So to answer your question, GCobb: no, it's not too much.

(My take is twofold: As God is my witness, I never once wondered if GCobb had a blog; and two, that GCobb's sarcasm meter is outer limits here.)

Fangraphs: It's not Chipper's time yet. Hush you. I'm enjoying the Schmidt Hamlet'd endgame homage. Let's thank God that dream came true and get on with it already!

Prospectus: Ahead in the Count: Is Jimenez in over his head? Latest from TGP'er Matt Swartz, who SIERA's the Rockies' young stud. Bottom line: Ubaldo, Ugood, but Ulucky too. (sub req'd)

Federal Baseball: Hernandez No Match for Verlander as Nats fall to Tigers, 8-3.

BlueClaws downed by Legends, 10-3. Hewitt with a nice night.

Clearwater 2, Brevard County 1. Harold Garcia's hit streak at 20 now. Best news is that maybe one day, Aumont can save Jesus!

Jesus Sanchez started the game for the Threshers and gave up just one hit in five innings. He was followed by Phillippe Aumont who hurled three scoreless frames. Justin De Fratus (2-0) then came on and worked the final two innings for the win. All three pitchers allowed just four hits combined and struck out seven.