Share All sharing options for: Welcome Back? Phillies 7, Yankees 1

Another one for the "Baseball is a funny game" file: super-ace Roy Halladay gets smacked around for six runs in Tuesday's series opening loss to the Yankees, then desiccated Jamie Moyer stymies the defending world champs to the tune of two runs over eight innings, and definition-of-sixth-starter Kyle Kendrick goes him one better by holding the AL East co-leaders to one run over seven as the Phillies take a series in the Bronx.

To be fair, Kendrick has turned in more than a couple performances this season suggesting he might be more than we thought he was. He's dominated the Braves twice already this season, albeit in Phillies losses, and won gems against the Cardinals, Pirates and Marlins. But this was the Yankees, a lefty-heavy lineup that has paced the majors in runs scored--and he shut them down too. The 25 year old allowed just four hits and two walks, striking out three in his 110 pitches. The one inning he got into trouble was the sixth, when with two outs, Mark Teixeira walked, and Alex Rodriguez and Robinson Cano followed with singles to score him. But Kendrick escaped further trouble when Placido Polanco made one of the finer catches you'll see this season, laying out on top of the tarp beyond the third base bag to reach into the stands and snag a Nick Swisher foul pop to end the inning.

That catch preserved a 3-1 lead that the Phils had built on a Ryan Howard RBI single in the fourth and a Shane Victorino two-run homer in the fifth against Andy Pettitte, the veteran lefty who beat them twice in the 2009 World Series and has gotten off to one of the best starts in his fine career. Victorino, who had snapped a long 0-fer with a three-run triple in Wednesday's 6-3 win, was 2 for 3 with two walks and two runs scored tonight. Carlos Ruiz joined him in getting off the schneid, snapping a 23 at-bat hitless drought with two doubles in his last two at-bats. The second one kicked off a four-run ninth inning that put the game out of reach, and represented the third inning in which the Phils cracked the scoreboard. Maybe three doesn't sound like a lot of innings in which to score... but tonight's win represented just the second time in the last 23 games the Phils have put up runs in at least three.

So... maybe we're done with this awful thing? Please? 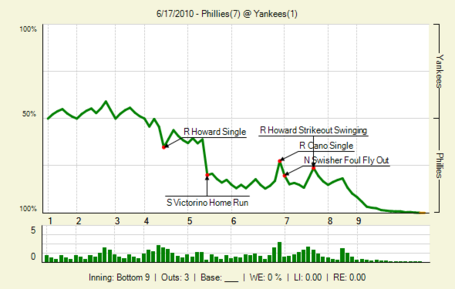