I could go on a long, righteous diatribe about the officiating in this game, focusing on the decision to start play despite an impending rainstorm, and failing to delay the game during a heavy downpour in the bottom of the first inning until after Cole Hamels surrendered a three-run bomb to Troy Glaus in a scene reminiscent of the 2008 World Series, minus the awesome outcome.

But honestly, the way this Phillies team is currently playing, what's the point?  There was no way they were winning this game.

Hamels did not return to the game after a one hour and five minute rain delay, as the Phillies cobbled together a rogue's gallery of bullpennery consisting of every relief pitcher who ever lived, just before a day game in Atlanta, with Kyle Kendrick starting.

Braves starter Tim Hudson, however, did return to the game, and pitched well, allowing just five hits over six innings, striking out six along the way but allowing the Phillies' first home run since the Taft Administration, a two run shot to Ryan Howard that made the score 6-2.

Another big story was shoddy defense, with temp agency third baseman Juan Castro booting a sure double play ball in the bottom of the third with one out, allowing one run to score.  On the next play, an Omar Infante RBI single made the score 5-0 and all but wrapped it up.  A Jayson Werth misplay on a single right field in the bottom of the eighth off the bat of Eric Hinske allowed the 2008 WFC Strikeout Victim to advance to third, a spot from which he scored on a Martin Prado sacrifice fly.

The Phillies made things kinda interesting in the ninth, scoring one run and loading the bases for Ryan Howard against Billy Wagner with semi-predictable results (a soft groundout to second base), ending the ballgame and preserving a 7-3 Atlanta victory.

One positive takeaway: Extra base hits from each of Howard, Chase Utley, and Jayson Werth!  Another: Double digit hits!

The Phillies, with Kyle Kendrick on the hill, look to avoid the sweep this afternoon against Derek Lowe. 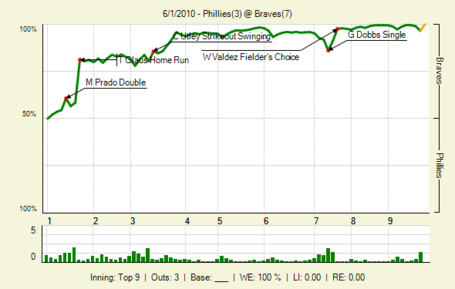