Omar Infante got the game winning RBI today, as the Phillies lost yet another to the first-place Braves.  But, as has been the story for the past almost two weeks, Infante isn't to blame here.  Kyle Kendrick pitched well, giving up only 1 run in 7 strong innings.

To blame, as you know just from seeing the headline, is the Phillies offense.  Once again, they were offensive.  6 singles and 2 walks is all they could manage against Derek Lowe and Billy Wagner today.

Jayson Werth and Ryan Howard contributed a single each, with Werth getting an RBI as well.  Chase Utley, on the other hand, continued his abject failure at the plate.  In the third inning, when the Phillies looked like they might actually have a rally (if you're not sure what that word means, and I understand if you've forgotten, you can look here), Utley came to the plate with one out and bases loaded.  The result?  Double play.

After that, Lowe faced the minimum until the 8th.  The Phillies had base runners in each of the last two innings, but nothing materialized.  Wilson Valdez spoiled the only real chance the Phils had, when he flied out with Ross Gload on third and two outs in the eighth.

Enjoy the off-day tomorrow.  We know for sure the Phils won't lose. 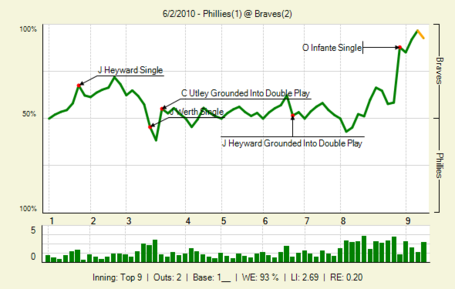