Incredibly, the Phillies are just 8-7 in games when Halladay starts.

If the Phillies get it in gear enough to get back to another World Series, we might see the Twins again, but maybe with you-know-who. If you're frustrated enough to boo, remember: DON'T PANIC.

City Paper: A New Hope: Can the Phillies' first-rounder overcome his privileged upbringing?
(h/t David Cohen) Published last week, but way worth the read, not least of which for Jesse Biddle's senior project and his dad's money quote:

"I actually stood here with those guys, the seniors he was on stage with, and I told them, 'He's not going to make the friends you make, he's not going to get to go out partying, and he's not going to be able to get laid the way you guys get laid.' You need to recognize that you're his boys, and you can't let him slip away."

A game, a father, and a son. Speaking of dads, here's Phillies beat writer Matt Gelb on his dad. Happy (belated) Father's Day to all you TGP dads out there.

Inside the Phillies: Phillies ran into tough schedule, tough hurlers. Another look at Slumpmas. Well, at least we're starting to see the past tense in headlines. Amirite? Amirite?

Fangraphs: Pedro and the Phils. This time, by the numbers. The more I ponder the move, the more I see it as a failure of imagination (except for the light in the night sky and the superhero cape parts).

Phillies' prospect Singleton discovers that patience pays off.  Good profile on the 18-year-old Lakewood phenom. We'll see how patient everyone is in three years at this rate.

Scott Mathieson should be useful and maybe better despite his surgeries. Forcefully put.

Prospectus Q&A: Davey Lopes. If you missed the source of the "Chase Utley has a hurt knee" rumor on Friday, it was this piece. Really, I don't know where these things get started. Oh, wait:

Chase [Utley] has been hampered by a little bit of a knee injury.

Beyond that tempest in a teapot, I've always enjoyed interviews with Lopes. (Subscription usually req'd, but not for this piece).

Minor leagues: Frustrated by the parent club? Below the AAA level, there's some excitement down on the farm.

IronPigs 5, S/W-B Yankees 4. First series win of the year for our piggies. Nate Bump hit on elbow, though.

Lakewood 6, Kannapolis 3. Congrats BlueClaws, for clinching the first half title in the South Atlantic League's Northern Division. Jonathan Singleton 2 HRs for the (mostly underage'd) champagne bash'd win! They're likely to stay intact for the second half, so get up to Lakewood if you can. As a lagniappe, here's a Saturday Inquirer piece on Sebastian Valle. 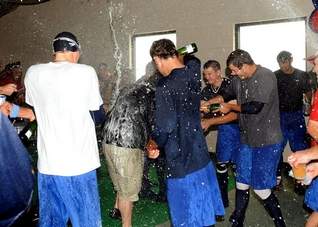 Williamsport 4, State College 2. The short season off to a nice start, as the Crosscutters swept the Spikes. Eric Pettis, welcome to pro ball, and a helluva weekend for Domingo Santana, who was sent down from idle Clearwater.