I, For One, Welcome Our New Ace Overlord: Phillies 2, Indians 1

Share All sharing options for: I, For One, Welcome Our New Ace Overlord: Phillies 2, Indians 1

Jamie Moyer continues his improbable string of outstanding pitching (OK, forget the Red Sox game), going eight innings tonight against the Cleveland Indians, allowing just two hits, one a solo home run by Russell Branyan, the 505th bomb allowed by Moyer in his career, tying him with Robin Roberts for the most all time.

That dubious honor aside, Moyer again was masterful.  The Phillies offense, however, showed more signs of regressing to its May/June Slumpmas doldrums, despite the return of shortstop Jimmy Rollins to the lineup after his second DL stint of the season.  After a two run first inning, the Phillies failed to score the rest of the way.  The Phillies messed up a scoring opportunity in the bottom of the fourth, when Raul Ibanez was called for interference on an out-of-line takeout slide to break up a double play, scratching the run that would have scored from third on the play.  Phillies manager Charlie Manuel was ejected upon arguing the call.

This being the Phillies, the ninth inning became an adventure.  After retiring the first batter in the ninth, reliever J.C. Romero surrendered an infield single and a walk to rookie phenom Carlos Santana, compelling acting manager Pete Mackanin to bring in Brad Lidge to record the final two outs.  Which he did, striking out Austin Kearns and Jhonny Peralta on nasty sliders to secure the win for the Fightins.

At this point, it probably goes without saying that forecasting Jamie Moyer's performance on a given night or in a given season is impossible.  Enjoy the ride, friends. 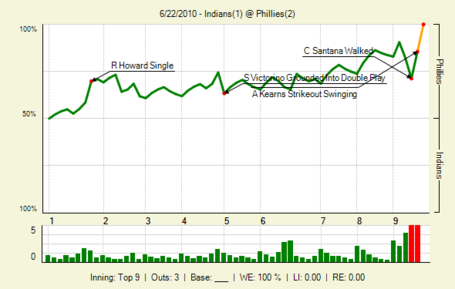