Share All sharing options for: Some Phillies Links for You, June 23, 2010: Little Big Brown, Daulton: The Original Phillies Space Cadet

Look, nobody's suggesting that Ryan Howard or Chase Utley or Roy Halladay or Cole Hamels or Rollins is going to look at what happened and think, "OMG, if we don't start winning some games, I could be next." The star players who will ultimately determine whether the Phillies come out of their funk pretty much have immunity. Some have no-trade clauses. All have big contracts that are difficult to move.

Is anyone else shocked that a mainstream writer used "OMG" in an article?

Daulton to join Phillies Wall of Fame
Won't it be cool in 15 or 20 years when were are some really great Phillies players inducted into the Wall of Fame, and not just fan favorites / "characters" from the vast expanse of Turd Seasons?

If Brown indeed is able to respond to negativity he's got a great career ahead of him in Philadelphia, the town that once booed Santa Claus.

May having strong June for Threshers
The good news is, homeboy is now probably the Phillies' third best pitching prospect (behind Jarred Cosart and Brody Colvin).

Mets may 'rent' Lee - NYPOST.com
I hate it when the Mets contemplate smarter personnel moves than the Phillies.

How I met Halladay on my recent holiday
Trolling Times Square nudie clubs, I KNEW IT.

"Philadelphia fans are the most, uh, most persistent fans in the world. My wife is counted among them . . . it's a simple proposition. I root fervently for the Flyers or I sleep alone. It's not a hard call. It's not a hard call at all. That was one hell of a series, though."

I bet he snores a lot.

Fish Wrap - Marlins 10, Orioles 4 - FishStripes
I wish the Phillies got to play the Orioles (even though they swept last year).

Aaaand, lastly, I just got back from a long weekend in Colorado, where I spotted this sucker in Durango.  For Jayson Wertz: 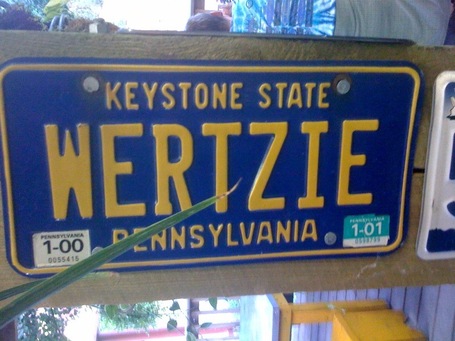