Through the first eight at-bats of Jimmy Rollins' second return from injury, his value seemed mostly symbolic: the shortstop/sparkplug/seer was an underwhelming 0 for 8. But that was all forgotten very quickly when Rollins came up with a man on second and one out in the bottom of the 9th and the Phillies trailing the visiting Indians 6-5. Rollins pulled a Kerry Wood fastball down the right field line and into the cheering crowd to give the Phils a much-needed walkoff win--only their second of the season.

The comeback washed out much of the bad taste from a mostly ugly night of baseball. It started with Kyle Kendrick's reversion to his Mr. Hyde form, as the right-hander allowed two two-run homers to Cleveland's Shin-Soo Choo among five runs (four earned) in four-plus innings of work. Add in bad base-running and situational hitting, with the Phils running themselves into outs in the second and sixth inning and hitting into two double plays, and a foul mix of bad defense and bad luck that looked like it would cost the Phils the game in the top of the ninth.

With the game tied at 5, Anderson Hernandez led off with a bunt single on a ball that Chad Durbin looked like he would field before straining a hamstring.  J.C. Romero came on and surrendered a bloop single to Trevor Crowe, who had three hits on the night and scored four of Cleveland's six runs, to put runners at the corners. After Choo grounded back to the mound, Hernandez got himself caught between third and home but stayed in the rundown long enough to allow Crowe to get to third and Choo to second. Carlos Santana followed with a hard grounder to shortstop that Rollins threw wide of home, allowing Crowe to score the go-ahead run.

In addition to Rollins' quick redemption, Jayson Werth had his best game in weeks: 3 for 3 plus a walk, including his 25th double and 13th homer of the season. Brian Schneider contributed as well, with a game-tying solo home run in the seventh and a walk to lead off the bottom of the ninth and set up Rollins' heroics. Also notable was the return of lefty reliever Mike Zagurski, who looked sharp in 1.1 innings of scoreless relief with a strikeout--on a 94 mile fastball, no less--and a walk.

Joe Blanton opposes Indians ace Fausto Carmona in the series finale tomorrow afternoon as the Phils go for an almost-unimaginable sweep of an interleague series. 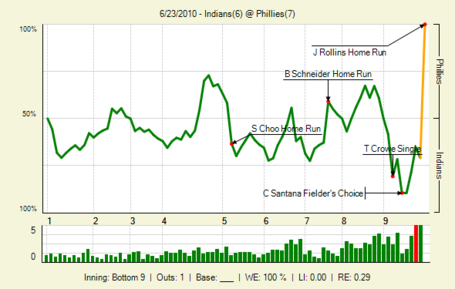