In what turned out to be a bizarre night on many levels, Jimmy Rollins tied a career high with four walks, Ross Gload struck the big blow -- a bases clearing "double" in the fifth inning that glanced off centerfielder Vernon Wells' glove, making the score 8-0 and blowing the game open -- Placido Polanco grounded into a career worst three double plays (erasing three Rollins walks in the process) and Roy Halladay won a baseball game despite not having his best stuff/command.  These are the games that those pennant winning squads of 2008 and 2009 seemed to win in bushels, right?

Despite running many deep counts, and only striking out four on the evening, Halladay kept his old teammates off the board for seven innings, allowing six hits and walking one.  The power hitting Blue Jays lineup just wasn't able to make solid contact on many of Halladay's offerings.

Much of the offensive credit goes to the bottom half of the order.  With Rollins' walk-a-riffic-ness mooted by Polanco's GIDPs, your fifth through ninth hitters drove in six of the team's nine runs, including a solo homer from Shane Victorino, and with a resurgent Jayson Werth scoring three himself.  First baseman Ross Gload, playing the field while Ryan Howard played designated hitter, was 3-for-4.

Call me bold but I think this team has busted out of Slumpmas. 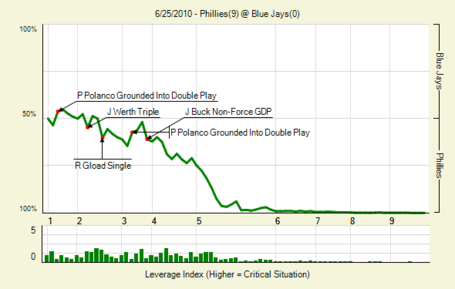