For serendipitous baseball on an early summer day, the turmoil surrounding a global economic summit stood in stark contrast to a languid and unexciting stupor of a game, as the Phillies lost to the Blue Jays, 5-1.

The slowly arriving crowd, many pinned to watch the end of the other affaire internationale of the day, Ghana's 2-1 victory over the United States in the World Cup, arrived in time to see Phillies starter Cole Hamels get hit for three home runs, all to left field, two of them just over the fence hugging the foul pole. Hamels left after just four innings, allowing all five runs. Hamels now has allowed 18 HRs this season, and in that respect, it seems like if we can't have Brett Myers, we'll have to reinvent him.

Hamels' control was never really good on this day, and for those of us sitting on the right field line, it seemed appropos that small grey clouds drifted just west of the park, shielding the embroiled fans from abject misery, instead left to glory in the minor nuances of the game, such as Jose Bautista's pigeon-toed batting stance, or counting the spike marks in the dirt (sixteen!) that formed the slow curve of Ross Gload's path to second base on his double. It was that kind of game.

Blue Jays starter Shaun Marcum was good, although it was difficult to tell after the Phillies offense worked him for 27 pitches in the first inning, and then pretty well abandoned the approach as the lineup veered off the talent cliff to such likes as Ross Gload (who played first for the DH Ryan Howard), Brian Schneider (the lingering headache that is filling in for the concussion to Carlos Ruiz), and Juan Castro, who played third for a resting Placido Polanco, and did it so well that he made me both pine for Greg Dobbs and write another poem:

His name is Spanish for something, though likely nothing good.

His every plate appearance is an unshakeable nag

that there is a bill to be paid, papers to be filed,

unbalanced pennies in the checkbook,

Other fetidnesses lingered on this 90+-degree afternoon, such as the halt of a lovely little 4-game win streak, Hamels' string of nine decent starts in a row, and Jayson Werth being held off the bases for the first time in a few games (and throwing in three strikeouts in the process). A few bright spots for the Phillies: first was Ryan Howard, who hit a solo HR to bring the score to 5-1, not that you'd notice on the fangraphs page, nor that I noticed either, as the boys and I had decamped from our sunburned seats to hunt and slay the wily helmet'd sundae. Nonetheless, I was impressed by my son's statistical take on Howard, who has hit five HRs in his last 10 games. "Dad, I figured something out. Ryan Howard is number 6, and he's the best player, and I'm six." Shove that up your WARs, people. Others included nice relief appearances from Nelson Figueroa, Danys Baez and Mike Zagurski.

Well, off to the series finale tomorrow, where the Phillies have an opportunity to accomplish many unlikely feats: 1) finish with a winning interleague record for the first time since 2007; 2) try to send new ace overlord Jamie Moyer (8-6, 4.43ERA, 4.90FIP, 4.64xFIP) out to win a game against a homer-frenetic Toronto offense; 3) continue selling out consective road games that are played at home. Brett Cecil (7-4, 4.06ERA, 3.82FIP, 4.07 xFIP) will get the ball for the Blue Jays. 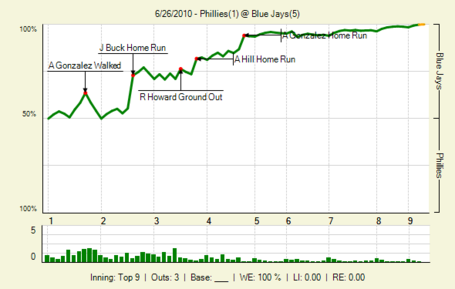