Share All sharing options for: See, That Wasn't So Bad - Phillies 9, Reds 6

A starting lineup that featured Greg Dobbs, Wilson Valdez, and Brian Schneider.  A starting pitcher who has had major problems this year.  Facing a first place team with a starting pitcher with an ERA under 3.00.  Blowing a save by giving up a three-run home run in the bottom of the ninth.  Their two key division rivals facing struggling sub-.500 teams.

And yet, there's a reason the games are played.  Somehow, on the day Chase Utley and Placido Polanco join Carlos Ruiz on the DL, everything worked out great for the Phillies.  Their offense came alive:  Brian Schneider hit a three-run home run, Wilson Valdez had 4 RBI, and Raul Ibanez had a key 10th inning RBI that ignited a 3-run rally to put the Phils over the top following Brad Lidge's blown save.  Joe Blanton pitched just well enough to keep the Phillies ahead, and J.C. Romero did what Lidge couldn't, nailing down the save in the bottom of the tenth.

And to top it off, the Mets and Braves lost.

Sometimes, even when storm clouds are bearing down on you, the sun prevails.  Let's hope tomorrow brings more of the same. 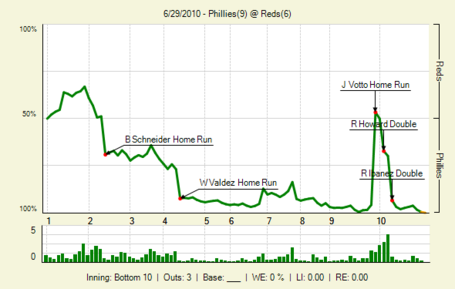