Subtitle: just like the major league club, there's no offense to be found here!

In all seriousness, Marti Wolever & Co. did focus fairly heavily on pitching in Rounds 2 through 30 of the MLB Rule 4 Draft today, with a few bats sprinkled in for good measure.  While Jesse Biddle will grab most of the headlines in the aftermath of this draft, the real success or failure is determined by all 50 selections made (and who among them signs), not just the first. 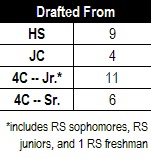 We've been harping on it in all of the draft preview stuff, but this really was a pitching-dominated draft, and the organization reacted accordingly, with 18 of the 30 selections through the first two days being hurlers.  Of more importance than the mere quantitative nature of the first two days, though, was the qualitative nature.  Simply put, the Phillies took a couple of fliers on some position players, but focused their efforts on drafting some pretty talented pitchers, and we'll dive into specifics after the jump.

The big names here, in addition to 1st round pick Jesse Biddle, are 5th rounder Scott Frazier and 2nd rounder Perci Garner.  Frazier is a lanky (6'6", 205-lb.) righthander from California who has touched 95 with his fastball and has a chance for three average or better pitches.  He's a classic projectable righty, the type the Phillies have loved over the years, and could even wind up adding some velocity as his frame fills out, though his mechanics could definitely use some smoothing.  He's not going to be an easy sign, but should be the organization's top priority for an overslot bonus in the later rounds.

Garner is interesting in that he's not a classic Phillies pick. A redshirt sophomore from Ball State, Garner was originally recruited to play quarterback for the Cardinals, but found much more success on the diamond.  He's more raw than most college players, but the ball leaps out of his hand, with his fastball touching 97 at times.  I'm a firm believer that athleticism is an underrated quality in pitchers, and Garner clearly has it in spades, so the hope is obviously that his command and consistency will improve as he commits to baseball full-time.

Other pitching selections I particularly liked include 7th rounder David Buchanan, a junior righthander from Georgia State, and 20th rounder Kevin Walter, a high school righthander from Colorado who may be signable away from his Boston College commitment.

Cameron Rupp, a junior catcher from the University of Texas, was the highest position player chosen.  Marti Wolever was in the broadcast booth in tonight's game and mentioned the need to add some catching depth with the recent departures of Lou Marson and Travis d'Arnaud.  The book on Rupp is that he's a solid defensive catcher with great raw power, but he's had some trouble making contact throughout his college career.

The Phillies being the Phillies, they just couldn't help themselves, grabbing a couple of toolsy outfielders in the top ten rounds.  To be honest, I actually kind of like both picks.  6th rounder Gauntlett Eldemire, a junior center fielder from the University of Ohio, has been a bit of an underachiever throughout his college career, but has flashed above-average speed and power and has the ability to stick in center field.  I think of him a bit like I thought of Michael Taylor when the Phils nabbed him back in 2007 -- a college outfielder with more upside, and more rawness, than most.  9th rounder Brenton Allen is a California prep product with a UCLA commitment, and there have been some positive reports on his hitting ability.

Wolever also spoke highly of 13th rounder John Hinson, a redshirt sophomore third baseman from Clemson who the Phillies believe has a chance to make a nice utility guy at the next level.  26th rounder Chris Duffy is an intriguing senior sign, as the first baseman/left fielder posted an eye-popping .447/.539/.850 line this year at Central Florida and has the sort of raw power the Phillies have targeted in some recent drafts.

There are still 20 rounds tomorrow, which the Phillies (and other clubs) will use to add organizational depth -- and to pop a couple of tough-to-sign high school guys to see if there might be a chance to get something done. Ultimately, it will be difficult to fully grade the draft haul until we know who signs and who doesn't, and with the signing deadline in mid-August, it will be awhile before we can do that.  Still, on first glance, the Phillies have managed to add a solid if not earth-shattering haul of talent, and I'll be interested to see how some of these guys perform when the New York-Penn League and the Gulf Coast League start up in a few weeks.